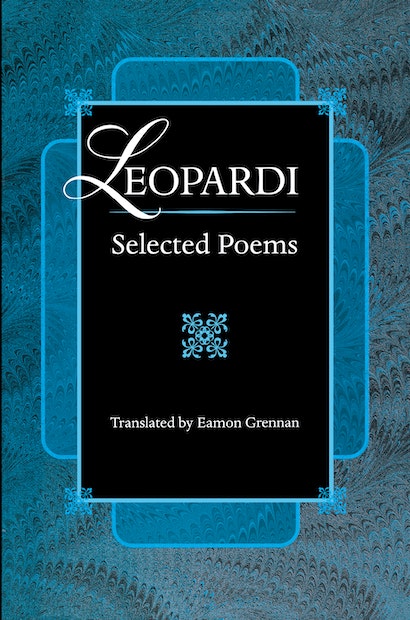 These translations of the major poems of Giacomo Leopardi (1798 — 1837) render into modern English verse the work of a writer who is widely regarded as the greatest lyric poet in the Italian literary tradition. In spite of this reputation, and in spite of a number of nineteenth-and twentieth-century translations, Leopardi’s poems have never “come over” into English in such a way as to guarantee their author a recognition comparable to that of other great European Romantic poets.


By catching something of Leopardi’s cadences and tonality in a version that still reads as idiomatic modern English (with an occasional Irish or American accent), Leopardi: Selected Poems should win for the Italian poet the wider appreciative audience he deserves. His themes are mutability, landscape, love; his attitude, one of unflinching realism in the face of unavoidable human loss. But the manners of the poems are a unique amalgam of philosophical toughness and the lyrically bittersweet. In a way more pure and distilled than most others in the Western tradition, these poems are truly what Matthew Arnold asked all poetry to be, a “criticism of life.” The translator’s aim is to convey something of the profundity and something of the sheer poetic achievement of Leopardi’s inestimable Canti.

Eamon Grennan has published three collections of poetry: What Light There Is & Other Poems, As If It Matters, and So It Goes. He has a degree in English and Italian from University College, Dublin, and a doctorate in English from Harvard University. A native of Ireland, he divides his time between there and Poughkeepsie, New York, where he is the Dexer M. Ferry, Jr., Professor of English at Vassar College.

"[Leopardi's] contribution to 19th-century European poetry second only to Baudelaire's . . . there's plenty to be grateful for in this lucidly translated selection. . ."—Boston Review