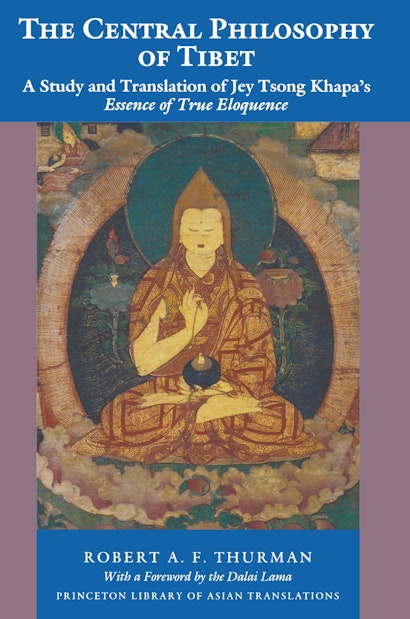 This is the paperback edition of the first full study, translation, and critical annotation of the Essence of True Eloquence by Jey Tsong Khapa (1357-1419), universally acknowledged as the greatest Tibetan philosopher. Robert Thurman’s translation and introduction present a strain of Indian Buddhist thought emphasizing the need for both critical reason and contemplative realization in the attainment of enlightenment. This book was originally published under the title Tsong Khapa’s Speech of Gold in the “Essence of True Eloquence.”
?


“I am very happy that Tsong Khapa’s masterpiece of Tibetan Buddhist philosophy has been translated into English, and can now be studied by Western philosophers and practitioners of Buddhism. It has long been one of my favorite works, and I hope that others will appreciate its deep thought and lucid insights as we have for centuries in Tibet.” — From the foreword by the Dalai Lama

"The first part [of the book], an extensive introduction, can stand on its own as an insightful and incisive study of Tibetan philosophy, its roots in India, and its relevance to a twentieth-century Western audience. The second part translates Tsong Khapa's text.... The quality of both the translation and the introductory essay makes this book a valuable contribution to the study of the central way."—Karen Lang, Journal of Asian Studies