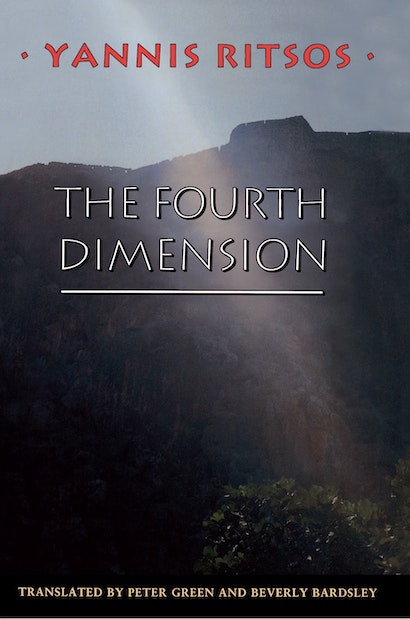 In the dramatic monologues that make up The Fourth Dimension — especially those based on the grim history of Mycenae and its royal protagonists — the celebrated modern Greek poet Yannis Ritsos presents a timeless poetic paradigm of the condition of Greece, past and present. The volume also contains a group of modern narratives, including the famous, and much-anthologized, “Moonlight Sonata.” Ritsos, rightly, regarded the The Fourth Dimension as his finest achievement. It is now presented to English- speaking readers for the first time in its entirety.


All the speeches of great men, about the dead and about heroes.
Astonishing, awesome words, pursued us even in our sleep,
slipping beneath closed doors, from the banqueting hall
where glasses and voices sparkled, and the veil
of an unseen dancer rippled silently
like a diaphanous, whirling wall
between life and death. This throbbing
our childhood nights, lightening the shadows of shields
etched on white walls by slow moonlight.

Peter Green is Professor of Classics at the University of Texas in Austin. The author of numerous scholarly works, he has also written several volumes of historical fiction, including The Laughter of Aphrodite (Murray/World; paperback forthcoming from University of California Press). Beverly Bardsley, a free-lance translator, lives in Austin.