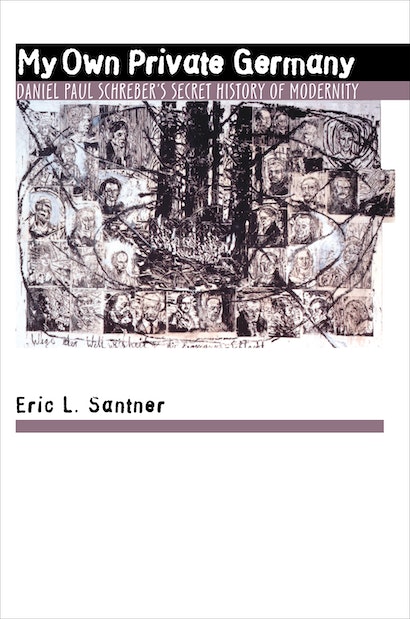 In November 1893, Daniel Paul Schreber, recently named presiding judge of the Saxon Supreme Court, was on the verge of a psychotic breakdown and entered a Leipzig psychiatric clinic. He would spend the rest of the nineteenth century in mental institutions. Once released, he published his Memoirs of My Nervous Illness (1903), a harrowing account of real and delusional persecution, political intrigue, and states of sexual ecstasy as God’s private concubine. Freud’s famous case study of Schreber elevated the Memoirs into the most important psychiatric textbook of paranoia. In light of Eric Santner’s analysis, Schreber’s text becomes legible as a sort of “nerve bible” of fin-de-siècle preoccupations and obsessions, an archive of the very phantasms that would, after the traumas of war, revolution, and the end of empire, coalesce into the core elements of National Socialist ideology.


The crucial theoretical notion that allows Santner to pass from the “private” domain of psychotic disturbances to the “public” domain of the ideological and political genesis of Nazism is the “crisis of investiture.” Schreber’s breakdown was precipitated by a malfunction in the rites and procedures through which an individual is endowed with a new social status: his condition became acute just as he was named to a position of ultimate symbolic authority. The Memoirs suggest that we cross the threshold of modernity into a pervasive atmosphere of crisis and uncertainty when acts of symbolic investiture no longer usefully transform the subject’s self understanding. At such a juncture, the performative force of these rites of institution may assume the shape of a demonic persecutor, some “other” who threatens our borders and our treasures. Challenging other political readings of Schreber, Santner denies that Schreber’s delusional system — his own private Germany — actually prefigured the totalitarian solution to this defining structural crisis of modernity. Instead, Santner shows how this tragic figure succeeded in avoiding the totalitarian temptation by way of his own series of perverse identifications, above all with women and Jews.

Eric L. Santner is the Harriet and Ulrich E. Meyer Professor of Modern European Jewish History at the University of Chicago, where he teaches in the Department of Germanic Studies. He is the author of Stranded Objects: Mourning, Memory, and Film in Postwar Germany.

"Immensely provocative, Santner's work compels a deep rethinking of the question of modernity and of our persistent and seemingly inescapable sense that the world is out of joint. . . . The author does a brilliant job of situating Schreber's work and life in the specific context of fin-de-siècle Germany."—James Surowiecki, The Boston Phoenix Literary Section

"My Own Private Germany is not only a relentlessly smart and beautifully documented portrait of Daniel Paul Schreber as an `echo chamber' of fin de siècle Germanic culture, it is also a real milestone in the ongoing attempt to elaborate a truly psychoanalytic approach to the pathologies of modern culture. . . . We will surely be talking about this one for years to come."—Peter Starr, Journal of the Psychoanalysis of Culture and Society

"Rarely does one come across a book that is so deeply satisfying. My Own Private Germany is a genuine breakthrough."—Slavoj Zizek, author of The Sublime Object of Ideology