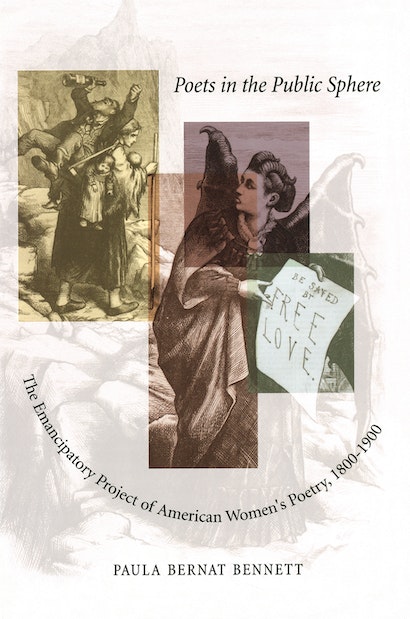 Based entirely on archival research, Poets in the Public Sphere traces the emergence of the “New Woman” by examining poetry published by American women in newspapers and magazines between 1800 and 1900. Using sources like the Kentucky Reporter, the Cherokee Phoenix, the Cincinnati Israelite, and the Atlantic Monthly, Bennett is able to track how U.S. women from every race, class, caste, region, and religion exploited the freedom offered by the nation’s periodical press, especially the poetry columns, to engage in heated debate with each other and with men over matters of mutual concern.


Far from restricting their poems to the domestic and personal, these women addressed a significant array of political issues — abolition, Indian removals, economic and racial injustice, the Civil War, and, not least, their own changing status as civil subjects. Overflowing with a wealth of heretofore untapped information, their poems demonstrate conclusively that “ordinary” nineteenth-century women were far more influenced by the women’s rights movement than historians have allowed. In showing how these women turned the sentimental and ideologically saturated conventions of the period’s verse to their own ends, Bennett argues passionately and persuasively for poetry’s power as cultural and political discourse. As much women’s history as literary history, this book invites readers to rethink not only the role that nineteenth-century women played in their own emancipation but the role that poetry plays in cultural life.

Paula Bernat Bennett is Professor of English at Southern Illinois University, Carbondale. The editor of several books, including Nineteenth-Century American Women Poets, she is the author of My Life a Loaded Gun and Emily Dickinson: Woman Poet.

"Bennett has uncovered a number of unknown and anonymous writers who sought a public forum for their often highly publicized views. Beautiful illustrations from a number of journals, meticulous explanatory notes, and a comprehensive index supplement this engaging volume."—Choice

"[Bennett advances] the critical discussions of poetry, sentimentality, women's cultural production, and the histories of gender and race."—Janet Gray, Legacy

"This ambitious and substantial work makes a significant contribution to an emerging field that Bennett herself helped bring into being. There is no doubt that this book will be the most important single survey of nineteenth-century American women's verse yet to appear. It also clearly advances American feminist scholarship by turning its attention to the poetry heretofore neglected in favor of the period's prose."—Virginia Jackson, New York University

"Elegantly and carefully written, this is a genuinely innovative and ground-breaking work that provides us with new ways of reading a whole period of American literary history. Every single scholar concerned with American poetry will want to read it."—Cary Nelson, University of Illinois, Champaign-Urbana