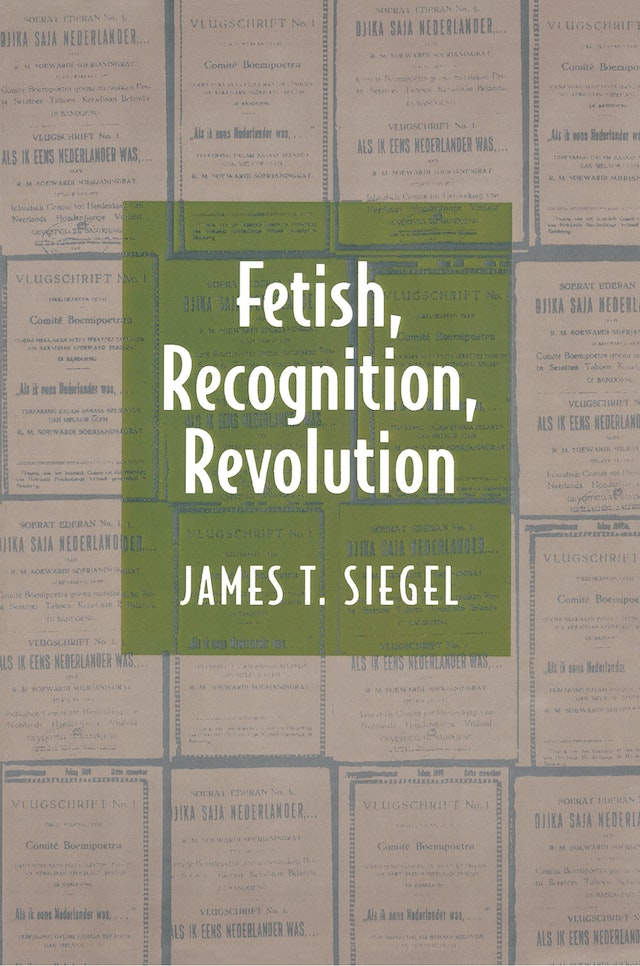 This book concerns the role of language in the Indonesian revolution. James Siegel, an anthropologist with long experience in various parts of that country, traces the beginnings of the Indonesian revolution, which occurred from 1945 through 1949 and which ended Dutch colonial rule, to the last part of the nineteenth century. At that time, the peoples of the Dutch East Indies began to translate literature from most places in the world. Siegel discovers in that moment a force within communication more important than the specific messages it conveyed. The subsequent containment of this linguistic force he calls the “fetish of modernity,” which, like other fetishes, was thought to be able to compel events. Here, the event is the recognition of the bearer of the fetish as a person of the modern world.

The taming of this force in Indonesian nationalism and the continuation of its wild form in the revolution are the major subjects of the book. Its material is literature from Indonesian and Dutch as well as first-person accounts of the revolution.

James T. Siegel is Professor of Anthropology and Asian Studies at Cornell University. He is the author of The Rope of God; Shadow, and Sound: The Historical Thought of a Sumatran People; and Solo in the New Order: Language and Hierarchy in an Indonesian City (Princeton).

"Siegel's analysis is convincing. It summoned Sumatran recollections of creating urban modernity through adopting music, clothing, language, and books from European sources, yet perceiving these new elements as effortlessly translated into a new Indonesian cultural world."—Choice

"Not since Kahin's and Anderson's classics, which were published decades ago, have I seen such a powerful explanation of the Indonesian revolution. Historians, anthropologists, and political scientists in the field of Indonesian, Southeast Asian, colonial and post-colonial studies, as well as scholars of literature, nationalism, and identity, will use this book with profit. A 'Siegel School' of Indonesian Studies will be established by this book."—Rudolf Mrázek, University of Michigan

"This is an extraordinary book. The virtuosity of the analyses is truly remarkable. Siegel's writing is oftentimes brilliant, and sometimes stunningly powerful."—Michael E. Meeker, University of California, San Diego