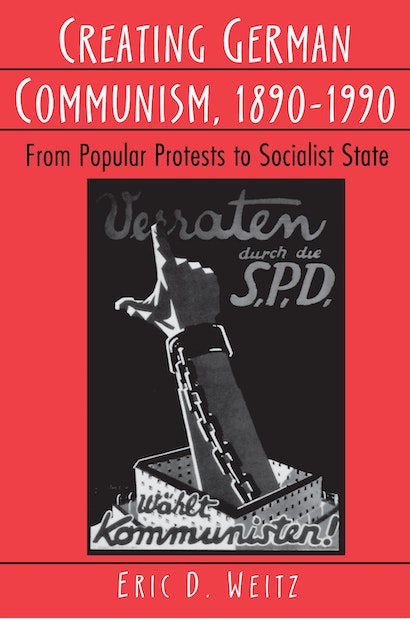 Eric Weitz presents a social and political history of German communism from its beginnings at the end of the nineteenth century to the collapse of the German Democratic Republic in 1990. In the first book in English or in German to explore this entire period, Weitz describes the emergence of the Communist Party of Germany (KPD) against the background of Imperial and Weimar Germany, and clearly explains how the legacy of these periods shaped the character of the GDR to the very end of its existence.

In Weimar Germany, social democrats and Germany’s old elites tried frantically to discipline a disordered society. Their strategies drove communists out of the workplace and into the streets, where the party gathered supporters in confrontations with the police, fascist organizations, and even socialists and employed workers. In the streets the party forged a politics of display and spectacle, which encouraged ideological pronouncements and harsh physical engagements rather than the mediation of practical political issues. Male physical prowess came to be venerated as the ultimate revolutionary quality. The KPD’s gendered political culture then contributed to the intransigence that characterized the German Democratic Republic throughout its history. The communist leaders of the GDR remained imprisoned in policies forged in the Weimar Republic and became tragically removed from the desires and interests of their own populace.

Eric D. Weitz (1953–2021) was Distinguished Professor of History at City College and the Graduate Center, City University of New York. He was also the author of A World Divided: The Global Struggle for Human Rights in the Age of Nation-States; Weimar Germany: Promise and Tragedy, which was named a New York Times Book Review Editor’s Choice; and A Century of Genocide: Utopias of Race and Nation (all Princeton).

"This fully researched and readable account of German communism demonstrates the complexities of Germany's society and politics through the rise and fall of communism."—Choice