Winner of the Margaret Mead Award

A classic, moving study of terminally ill children that emphasizes their agency and shows how we can relate to dying children more honestly 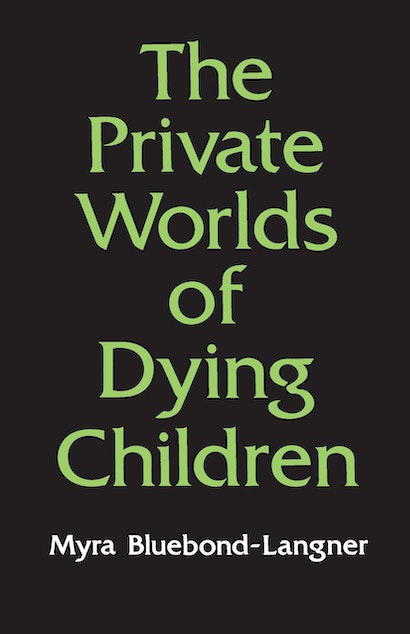 “The death of a child,” writes Myra Bluebond-Langner, “poignantly underlines the impact of social and cultural factors on the way that we die and the way that we permit others to die.” In a moving drama constructed from her observations of leukemic children, aged three to nine, in a hospital ward, she shows how the children come to know they are dying, how and why they attempt to conceal this knowledge from their parents and the medical staff, and how these adults in turn try to conceal from the children their awareness of the child’s impending death.

In contrast to many parents, doctors, nurses, and social scientists who regard the children as passive recipients of adult actions, Bluebond-Langner emphasizes the children’s role in initiating and maintaining the social order. Her sensitive and stirring portrait shows the children to be willful, purposeful individuals capable of creating their own worlds. The result suggests better ways of relating to dying children and enriches our understanding of the ritual behavior surrounding death.

Myra Bluebond-Langner is professor emerita at University College London and Board of Governors Professor of Anthropology Emerita at Rutgers University. She is also the author of In the Shadow of Illness: Parents and Siblings of the Chronically Ill Child (Princeton).

"To present the child's view is always refreshing and, even if the children are dying of leukemia, their ways of adapting to, denying, subverting, ignoring the hospital's social structure, and otherwise trying to maintain their real values in the face of death, are so authentic that they give zest and dignity to a world that is catastrophic for the children and their families. . . . One closes this interesting, tender book with a wish that the adults could do their jobs as well as the children do their dying."—American Journal of Psychiatry

"[A] convincing case for training of health professionals dealing with the terminally ill while recognizing the social constraints upon all involved. This is an exceptional and sympathetic study."—Library Journal

"A source of personal insight for all who care for children . . . lucid and sensitive."—Choice