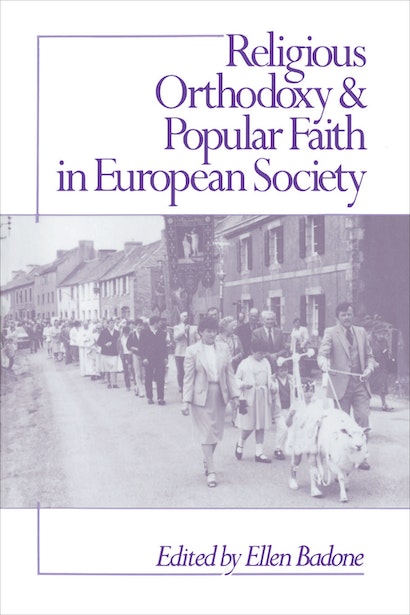 By examining the ongoing tension between popular and official religion in Europe, this collection of essays contributes significantly to the continuing effort to understand the religious experience of ordinary people. Ranging from the Mediterranean to northern Europe and including both Roman Catholic and Eastern Orthodox traditions, the ethnographic contexts evoked in these essays enable us to see people actively and creatively shaping their religious domain, sometimes in collaboration with official ritual specialists, often in open rebellion against them. The use of folklore texts and extensive narrative quotations, combined with an approach highlighting key symbols such as pilgrimages and festas, provides a common theoretical orientation throughout the bookone that considers how religious discourses are formed by social disciplines and relationships of power and subordination. This volume includes “Spirits and the Spirit of Capitalism” by Jane Schneider, “The Priest and His People: The Contractual Basis for Religious Practice in Rural Portugal” by Caroline B. Brettell, “The Struggle for the Church: Popular Anticlericalism and Religiosity in Post-Franco Spain” by Ruth Behar, “Pilgrimage and Popular Religion at a Greek Holy Shrine” by Jill Dubisch, “Breton Folklore of Anticlericalism” by Ellen Badone, “Stories of Power, Powerful Stories: The Drunken Priest in Donegal” by Lawrence J. Taylor, and “Reflections on the Study of Religious Orthodoxy and Popular Faith in Europe” by Stanley Brandes.