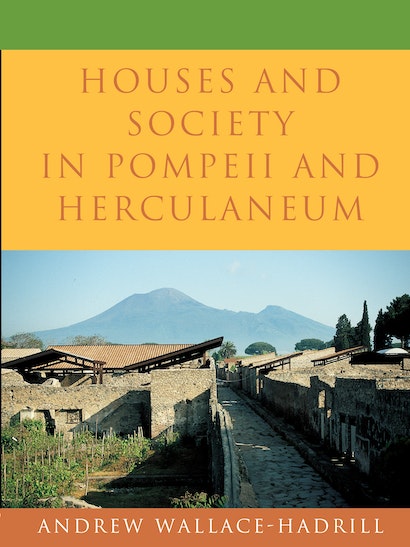 Few sources reveal the life of the ancient Romans as vividly as do the houses preserved by the eruption of Vesuvius. Wealthy Romans lavished resources on shaping their surroundings to impress their crowds of visitors. The fashions they set were taken up and imitated by ordinary citizens. In this illustrated book, Andrew Wallace-Hadrill explores the rich potential of the houses of Pompeii and Herculaneum to offer new insights into Roman social life. Exposing misconceptions derived from contemporary culture, he shows the close interconnection of spheres we take as discrete: public and private, family and outsiders, work and leisure.


Combining archaeological evidence with Roman texts and comparative material from other cultures, Wallace-Hadrill raises a range of new questions. How did the organization of space and the use of decoration help to structure social encounters between owner and visitor, man and woman, master and slave? What sort of “households” did the inhabitants of the Roman house form? How did the world of work relate to that of entertainment and leisure? How widely did the luxuries of the rich spread among the houses of craftsmen and shopkeepers? Through analysis of the remains of over two hundred houses, Wallace-Hadrill reveals the remarkably dynamic social environment of early imperial Italy, and the vital part that houses came to play in defining what it meant “to live as a Roman.”

Andrew Wallace-Hadrill is Professor of Classics at the University of Reading in England.

"Wallace-Hadrill's book now joins the ranks of the revisionist studies [of Pompeian society], but far surpasses them in the breadth of its vision and the fundamental nature of its challenge to the Maiurian orthodoxy. Wallace-Hadrill belongs to a rare breed, the social historian who has an intimate first-hand knowledge of the archaeological evidence; and this book is a fitting witness to the benefits which such a range of interest can bestow. It is a major statement in its field, and will set the agenda for future generations of researchers into Pompeian society."—Roger Ling, Burlington Magazine

"[In] this splendidly illustrated book . . . Wallace-Hadrill argues for a new understanding of urban life in the early [Roman] empire. This book is highly recommended for anyone interested in Greco-Roman study."—Richard S. Ascough, Religious Studies Review