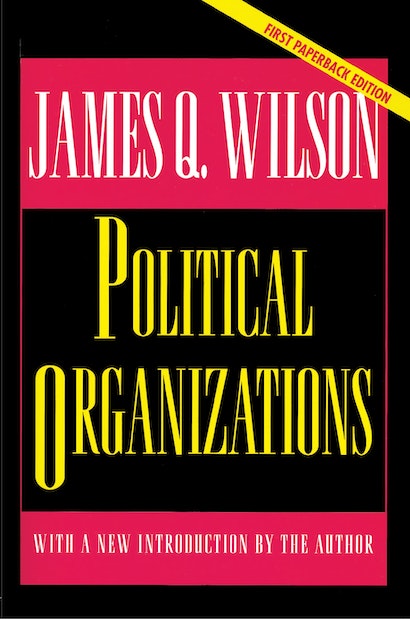 A major work by one of America’s eminent political scientists, Political Organizations has had a profound impact on how we view the influence of interest groups on policymaking. James Wilson wrote this book to counter two ideas: that popular interests will automatically generate political organizations and that such organizations will faithfully mirror the opinions and interests of their members. Moreover, he demonstrated that the way in which political organizations (including parties, business groups, labor unions, and civil rights associations) are created and maintained has a profound impact on the opinions they represent and the tactics they use. Now available for the first time in paperback, this book has broadened its scope to include recently developed organizations as it addresses many of today’s concerns over the power of such groups as special-interest lobbies.


In 1973, when this book was first published, the press and public were fascinated by the social movements of the 1960s, thinking that the antiwar and civil rights movements might sweep aside old-fashioned interest-group lobbies. Wilson argued, however, that such movements would inevitably be supplanted by new organizations, ones with goals and tactics that might direct the course of action away from some of the movements’ founding principles. In light of the current popular distress with special-interest groups and their supposed death-grip on Congress, Wilson again attempts to modify a widely held view. He shows that although lobbies have multiplied in number and kind, they remain considerably constrained by the difficulty they have in maintaining themselves.

James Q. Wilson is the James Collins Professor of Management and Public Policy at the University of California, Los Angeles. He is the author of many books and has served on numerous national commissions concerned with public policy.