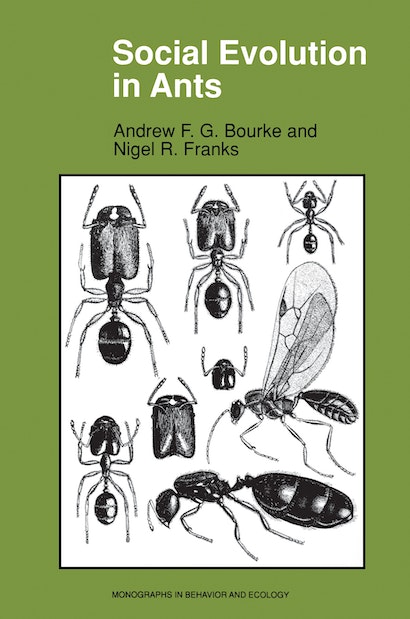 Biologists since Darwin have been intrigued and confounded by the complex issues involved in the evolution and ecology of the social behavior of insects. The self-sacrifice of sterile workers in ant colonies has been particularly difficult for evolutionary biologists to explain. In this important new book, Andrew Bourke and Nigel Franks not only present a detailed overview of the current state of scientific knowledge about social evolution in ants, but also show how studies on ants have contributed to an understanding of many fundamental topics in behavioral ecology and evolutionary biology.


One of the substantial contributions of Social Evolution in Ants is its clear explanation of kin selection theory and sex ratio theory and their applications to social evolution in insects. Working to dispel lingering skepticism about the validity of kin selection and, more broadly, of “selfish gene” theory, Bourke and Franks show how these ideas underpin the evolution of both cooperation and conflict within ant societies. In addition, using simple algebra, they provide detailed explanations of key mathematical models. Finally, the authors discuss two relatively little-known topics in ant social biology: life history strategy and mating systems.


This comprehensive, up-to-date, and well-referenced work will appeal to all researchers in social insect biology and to scholars and students in the fields of entomology, behavioral ecology, and evolution.

Andrew Bourke is a Research Fellow at the Institute of Zoology of the Zoological Society of London.Nigel Franks is a Senior Lecturer in the School of Biology and Biochemistry, University of Bath, England.

"I cannot praise their book too highly.... [It] will surely become essential reading for any student interested in the evolution of insect sociality and will be a standard reference source for teachers and researchers alike."—The Times Higher Education Supplement

"Social Evolution in Ants is recommended not only to people enthusiastic about social insects but also to those with a broad interest in evolution in general."—Nature