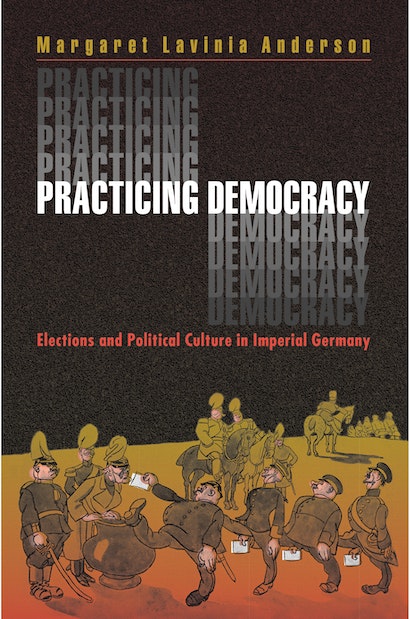 What happens when manhood suffrage, a radically egalitarian institution, gets introduced into a deeply hierarchical society? In her sweeping history of Imperial Germany’s electoral culture, Anderson shows how the sudden opportunity to “practice” democracy in 1867 opened up a free space in the land of Kaisers, generals, and Junkers. Originally designed to make voters susceptible to manipulation by the authorities, the suffrage’s unintended consequence was to enmesh its participants in ever more democratic procedures and practices. The result was the growth of an increasingly democratic culture in the decades before 1914.


Explicit comparisons with Britain, France, and America give us a vivid picture of the coercive pressures — from employers, clergy, and communities — that German voters faced, but also of the legalistic culture that shielded them from the fraud, bribery, and violence so characteristic of other early “franchise regimes.” We emerge with a new sense that Germans were in no way less modern in the practice of democratic politics. Anderson, in fact, argues convincingly against the widely accepted notion that it was pre-war Germany’s lack of democratic values and experience that ultimately led to Weimar’s failure and the Third Reich.

Practicing Democracy is a surprising reinterpretation of nineteenth- and early twentieth-century Germany and will engage historians concerned with the question of Germany’s “special path” to modernity; sociologists interested in obedience, popular mobilization, and civil society; political scientists debating the relative role of institutions versus culture in the transition to democracy. By showing how political activity shaped and was shaped by the experiences of ordinary men and women, it conveys the excitement of democratic politics.

Margaret Lavinia Anderson is Professor of History at the University of California, Berkeley. She is the author of Windthorst: A Political Biography and has contributed widely to issues in German and European History.

"An exciting and valuable addition to the historiography of modern Germany."—Choice

"Margaret Lavinia Anderson's study of electoral practices in imperial Germany provides the most compelling assault to date on the idea that the German political system encouraged authoritarian attitudes, values, and political practices. . . . This is a powerful, challenging piece of scholarship. . . .[It] mobilizes a breathtaking arsenal of sources and a radiating presentation makes it as readable as it is enlightening. . . . This book is, in all events, a major achievement."—Roger Chickering, American Historical Review

"One has to be somewhat in awe of Professor Anderson's wide reading, trenchant prose, keen eye, and nose for a good argument. This book is exemplary for how history ought to be written. The author is in command of a vast body of material, presented economically with a sensitivity to significant detail, and it is marshalled behind original, clearly conceived arguments that frequently defy conventional assumptions. The result is not only the best book yet written on German Reichstag elections and political culture before 1918. It is also a key work on the history of modern Europe, and on electoral democracy in the industrial era."—Brett Fairbarin, German History

"Although the Weimar Republic may have been the first German democratic state, it was not, Margaret Lavinia Anderson shows in Practicing Democracy, Germany's first experience of democracy. Anderson argues that the interplay among the popular experience, institutional structure, and the political practice of universal male suffrage in Reichstag elections paradoxically produced a political culture of democracy in the nondemocratic imperial German state. Anderson's explanation of [this] paradox has important implications not only for German history, but also for recent political science literature on the transition to democracy. [Anderson's book] is theoretically startling, persuasively argued, richly detailed, and a pleasure to read."—Andrew Zimmerman, German Studies Review