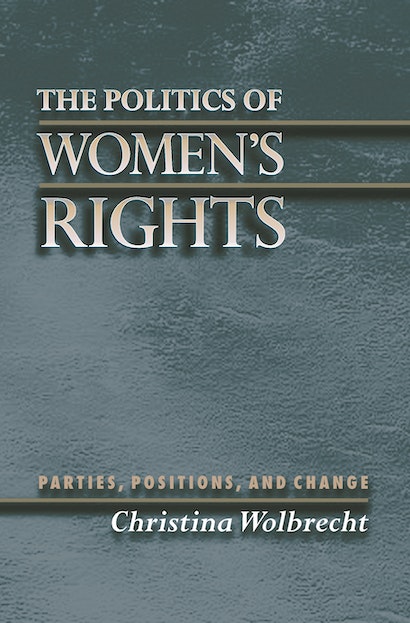 Here Christina Wolbrecht boldly demonstrates how the Republican and Democratic parties have helped transform, and have been transformed by, American public debate and policy on women’s rights. She begins by showing the evolution of the positions of both parties on women’s rights over the past five decades. In the 1950s and early 1960s, Republicans were slightly more favorable than Democrats, but by the early 1980s, the parties had polarized sharply, with Democrats supporting, and Republicans opposing, such policies as the Equal Rights Amendment and abortion rights. Wolbrecht not only traces the development of this shift in the parties’ relative positions — focusing on party platforms, the words and actions of presidents and presidential candidates, and the behavior of the parties’ delegations in Congress — but also seeks to explain the realignment.


The author considers the politically charged developments that have contributed to a redefinition and expansion of the women’s rights agenda since the 1960s — including legal changes, the emergence of the modern women’s movement, and changes in patterns of employment, fertility, and marriage. Wolbrecht explores how party leaders reacted to these developments and adopted positions in ways that would help expand their party’s coalition. Combined with changes in those coalitions — particularly the rise of social conservatism within the GOP and the affiliation of social movement groups with the Democratic party — the result was the polarization characterizing the parties’ stances on women’s rights today.

Christina Wolbrecht is the Packey J. Dee Assistant Professor of Government and International Studies at the University of Notre Dame. Her current projects include an investigation into the voting behavior of women following their enfranchisement in the 1920s and early 1930s.

"Informative and well-written . . . engaging and impressive . . . Furthermore, it is theoretically rich, drawing on a wide array of scholars and disciplines."—Shari Garber Bax, Perspectives on Political Science

"Christina Wolbrecht's book advances our understanding of the ties between American parties and women's issues in a way that forces us to rethink traditional notions of how voting changed with the addition of women to the electorate. The Politics of Women's Rights is likely to cause a significant stir among voting behavior scholars as it argues against the current view that we are in an 'anti-party' age, with parties too weak to usher in realignments or significantly reshape public issues. This book, by contrast, tells a story of 'gendered' parties, which has up to now been largely unacknowledged."—Anne Costain, University of Colorado, Boulder

"The Politics of Women's Rights is an excellent book, written in a clear and engaging style and filled with insightful analysis. There has been too little attention directed to the way women's rights have polarized the two major parties. This book will appeal to a wide range of social scientists."—Eileen McDonagh, Northeastern University