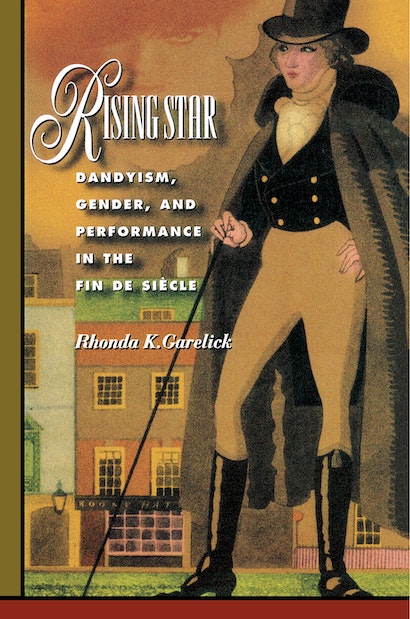 Celebrity personalities, who reign over much of our cultural landscape, owe their fame not to specific deeds but to the ability to project a distinct personal image, to create an icon of the self. Rising Star is a fascinating look at the roots of this particular form of celebrity. Here Rhonda Garelick locates a prototype of the star personality in the dandies and aesthete literary figures of the nineteenth century, including Beau Brummell, Baudelaire, Mallarmé, and Oscar Wilde, and explores their peculiarly charged relationship with women and performance.


When fin-de-siècle aesthetes turned their attention to the new, “feminized” spectacle of mass culture, Garelick argues, they found a disturbing female counterpart to their own highly staged personae. She examines the concept of the broadcasted self-image in literary works as well as in such unwritten cultural texts as the choreography and films of dancer Loie Fuller, the industrialized spectacles of European World Fairs, and the cultural performances taking place today in fields ranging from entertainment to the academy. Recent dandy-like figures such as the artist formerly known as Prince, Madonna, Jacques Derrida, and Jackie O. all share a legacy provided by the encounter between “high” and early mass culture. Garelick’s analysis of this encounter covers a wide range of topics, from the gender complexity of the European male dandy and the mechanization of the female body to Orientalist performance, the origins of cinema, and the emergence of “crowd” theory and mass politics.

Rhonda K. Garelick is Assistant Professor of French at Connecticut College. She has written on European literature, mass culture, female performance, and modern dance. She is currently writing a book on the dancer Loie Fuller.

"Garelick ... has fascinating things to tell us about a series of literary treatments of dandyism—by Balzac and Baudelaire ... [it contains] an intriguing section on L'Eve Future ... and a riveting account of Loie Fuller."—Simon Callow, The Observer

"Rising Star is gracefully and clearly written, thoroughly researched, and copiously documented. . . . By showing the affinities between nineteenth-century French culture and our own, Garelick sheds provocative new light on both."—Gail Finney, Modernism/Modernity

"A wonderfully written book that joins extensive and solid research with imaginative interpretation. Rhonda Garelick makes highly intelligent use of contemporary cultural critique, materials on queer performance, commodity merchandising, and interpretive mediation. I was fully engaged, entertained, and enlightened."—Mary Ann Caws, author of The Art of Interference and The Surrealist Look: An Erotics of Encounter