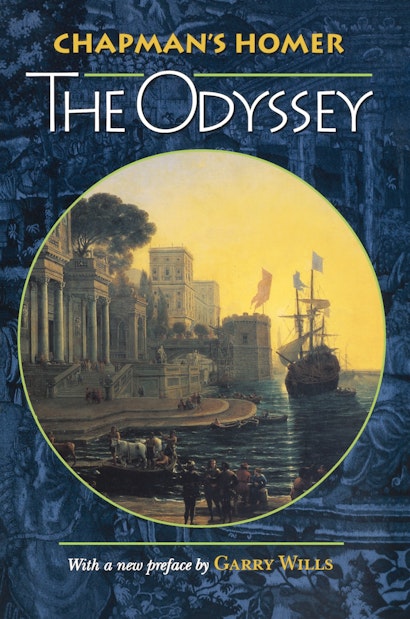 George Chapman’s translations of Homer are among the most famous in the English language. Keats immortalized the work of the Renaissance dramatist and poet in the sonnet “On First Looking into Chapman’s Homer.” Swinburne praised the translations for their “romantic and sometimes barbaric grandeur,” their “freshness, strength, and inextinguishable fire.” The great critic George Saintsbury (1845-1933) wrote: “For more than two centuries they were the resort of all who, unable to read Greek, wished to know what Greek was. Chapman is far nearer Homer than any modern translator in any modern language.” This volume presents the original text of Chapman’s translation of the Odyssey (1614-15), making only a small number of modifications to punctuation and wording where they might confuse the modern reader. The editor, Allardyce Nicoll, provides an introduction, textual notes, a glossary, and a commentary. Garry Wills’s preface to the Odyssey explores how Chapman’s less strained meter lets him achieve more delicate poetic effects as compared to the Iliad. Wills also examines Chapman’s “fine touch” in translating “the warm and human sense of comedy” in the Odyssey.

Oft of one wide expanse had I been told
That deep-browed Homer ruled as his demesne;
Yet did I never breathe its pure serene
Till I heard Chapman speak out loud and bold.
— John Keats

"In Chapman's Whole Works of Homer . . . English is spendthrift, inebriate with waste motion, at times precious and as yet uncertain of its coruscating force. It is also the language of Elizabethan and Jacobean drama, charged with sensory, corporeal thrust. At moments, it is already exact in that manual, pragmatic vein which is the virtue of English. At others, it comes armed with lyric sorrow. Homer, as Chapman construes him . . . makes the English language know itself and impels it to cast its lexical-grammatical net over a thronging prodigality of life."—George Steiner, Homer in English

"Each age approaches Homer, and particularly the Odyssey, with a kind of astonishment . . . Chapman was Shakespeare's contemporary. . . At times, noticing the epic sustainability of his verse, you get the feeling that he occupies a point on an imaginary line between Shakespeare and Milton. . ."—Nicholas Lezard, The Guardian