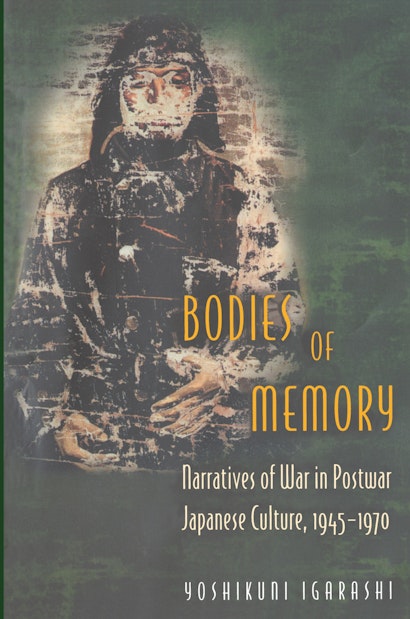 Japan and the United States became close political allies so quickly after the end of World War II, that it seemed as though the two countries had easily forgotten the war they had fought. Here Yoshikuni Igarashi offers a provocative look at how Japanese postwar society struggled to understand its war loss and the resulting national trauma, even as forces within the society sought to suppress these memories. Igarashi argues that Japan’s nationhood survived the war’s destruction in part through a popular culture that expressed memories of loss and devastation more readily than political discourse ever could. He shows how the desire to represent the past motivated Japan’s cultural productions in the first twenty-five years of the postwar period.


Japanese war experiences were often described through narrative devices that downplayed the war’s disruptive effects on Japan’s history. Rather than treat these narratives as obstacles to historical inquiry, Igarashi reads them along with counter-narratives that attempted to register the original impact of the war. He traces the tensions between remembering and forgetting by focusing on the body as the central site for Japan’s production of the past. This approach leads to fascinating discussions of such diverse topics as the use of the atomic bomb, hygiene policies under the U.S. occupation, the monstrous body of Godzilla, the first Western professional wrestling matches in Japan, the transformation of Tokyo and the athletic body for the 1964 Tokyo Olympics, and the writer Yukio Mishima’s dramatic suicide, while providing a fresh critical perspective on the war legacy of Japan.

Yoshikuni Igarashi is Assistant Professor of History at Vanderbilt University.

"With this book, Yoshikuni Igarashi contributes significantly to our understanding of the emergence and solidification of memories of the war in post-war Japan. . . . Absorbing and thought-provoking reading."—Beatrice Trefalt, Japanese Studies

"An innovative attempt to trace the "absent presence of war memories" in the cultural discourse of postwar Japan. The author's juxtaposition of examples from different cultural registers is distinctive, persuasive, and provocative, and the book is a pleasure to read."—Carol Gluck, Columbia University

"This is history writing at its best. The author maintains a subtle tension between historic continuities and postwar discontinuity, between interpretation and documentation, between political and cultural analysis, between literary and mass cultural analysis, and between the posited and resurrected body of the Japanese nation. His central concern for remembering postwar forgetting takes us from wartime exclusion of the victims of leprosy and mental illness under the Eugenics Law, to the cleansing of the postwar process of discursive formation of the 1950s and 1960s that brought us such figures as RikidÇzan, the Korean wrestler passing for Japanese. The treatment of the Japanese body and of Japanese bodies is a compelling narrative of the "foundational narrative" of the U.S.- Japan relationship that has informed so much of postwar Japanese cultural and economic recovery and forgetting, a remembering of Japanese suffering made possible by the forgetting of the colonized Asian body. Bodies of Memory thus provides a powerful explanation as to why so many in Japan refuse to accept Japan's modern history in Asia. It belongs alongside the new anthropology of Japan that is uncovering the layers of consciousness of postwar Japan, for Igarashi shows us how trauma may have been forgotten but not abandoned."—Miriam Silverberg, University of California, Los Angeles