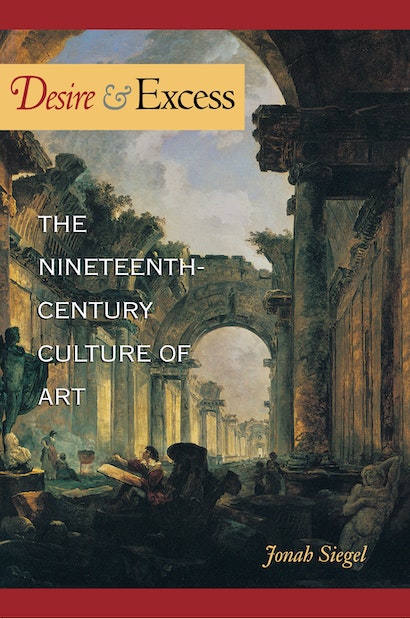 In this fascinating look at the creative power of institutions, Jonah Siegel explores the rise of the modern idea of the artist in the nineteenth century, a period that also witnessed the emergence of the museum and the professional critic. Treating these developments as interrelated, he analyzes both visual material and literary texts to portray a culture in which art came to be thought of in powerful new ways. Ultimately, Siegel shows that artistic controversies commonly associated with the self-consciously radical movements of modernism and postmodernism have their roots in a dynamic era unfairly characterized as staid, self-satisfied, and stable.

The nineteenth century has been called the Age of the Museum, and yet critics, art theorists, and poets during this period grappled with the question of whether the proliferation of museums might lead to the death of Art itself. Did the assembly and display of works of art help the viewer to understand them or did it numb the senses? How was the contemporary artist to respond to the vast storehouses of art from disparate nations and periods that came to proliferate in this era?

Siegel presents a lively discussion of the shock experienced by neoclassical artists troubled by remains of antiquity that were trivial or even obscene, as well as the anxious aesthetic reveries of nineteenth-century art lovers overwhelmed by the quantity of objects quickly crowding museums and exhibition halls. In so doing, he illuminates the fruitful crises provoked when the longing for admired art is suddenly satisfied. Drawing upon neoclassical art and theory, biographies of early nineteenth-century writers including Keats and Scott, and the writings of art critics such as Hazlitt, Ruskin, and Wilde, this book reproduces a cultural matrix that brings to life the artistic passions and anxieties of an entire era.

Jonah Siegel has taught at Columbia and Harvard Universities. He is Assistant Professor of English at Rutgers University.

"Desire and Excess is rich in . . . luminous insights, [and is] beautifully expressed. . . . The strength of [Siegal's book] lies in how vividly [it] evoke[s] a visual life for nineteenth-century Britons that makes us feel as if we see what they saw."—Gillen D'Arcy Wood, The Wordsworth Circle

"This is an extensive and ambitious study. . . . Siegel's book is the product of many years of thought and research. . . . [T]he central argument is compelling. The artists and critics of the nineteenth century are not, as they are sometimes thought to be, of one mind about the nature and role of art, and of the museums that house collections of art. The questions that worried them are complex and testing, and they are still unresolved."—Dinah Birch, Times Literary Supplement

"[A] subtly argued, richly textured, and gracefully written study of the interwoven histories of the figure of the artist and museum culture in the nineteenth-century Britain."—Hilary Fraser, Nineteenth-Century Literature

"Desire and Excess is one of the most exciting and sophisticated books I have read for some time. It is capaciously learned, sensitively researched, and wonderfully graceful and witty. By reconsidering the institutions and aesthetics responsible for the culture of the museum in modernity, it offers a new history of art-historical discourse."—Isobel Armstrong, Birkbeck College, London

"Desire and Excess tells about the time a dazzling company of poets got lost inside the Louvre, and only got out once they had together created the giant figure of the Artist. Jonah Siegel's brilliance is continually breathtaking, so it's lucky that he has placed such solid ground beneath our feet by his luxurious, intricately wrought scholarship."—Elaine Scarry, author of On Beauty and Being Just

"A timely book on the relationship of art and experience to the hallowed sanctuaries of museum collections. Jonah Siegel is right on target in dealing with this hugely important issue. I can only admire the vast range of themes and the quiet display of learning so apparent in this text. The book kept me constantly alert and informed."—Robert Rosenblum, New York University

"This ambitious and fascinating work traces the relations between the development of the museum, the history of taste, and the figure of the artist/author in nineteenth-century England. Here Jonah Siegel reads the long collapse of neoclassicism as a productive crisis in the modern conception of originality. His argument is remarkably rich, subtle, learned, and provocative."—Ian Duncan, University of Oregon

"Desire and Excess marks the emergence of a powerful and distinctive critical sensibility, remarkable both for its range of erudition and for the extraordinary quality of reflection brought to bear on the works explored here. Jonah Siegel mingles exacting close analysis and broad, confident historical and cultural reference in a manner that is almost unfailingly persuasive. The book will appeal to readers interested in the intellectual, artistic, literary, and cultural histories of Britain from the eighteenth through twentieth centuries, as well as to those engaged in postmodern critical reflection on art institutions and artistic agency."—James Eli Adams, Indiana University