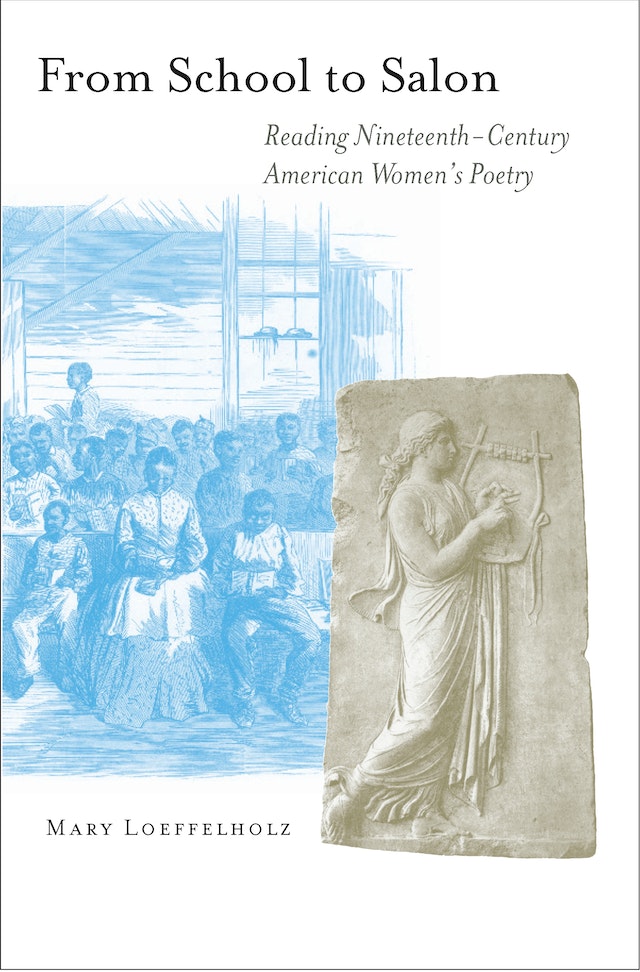 With the transformation and expansion of the nineteenth-century American literary canon in the past two decades, the work of the era’s American women poets has come to be widely anthologized. But scant scholarship has arisen to make full sense of it. From School to Salon responds to this glaring gap.

Mary Loeffelholz presents the work of nineteenth-century women poets in the context of the history, culture, and politics of the times. She uses a series of case studies to discuss why the recovery of nineteenth-century women’s poetry has been a process of anthologization without succeeding analysis. At the same time, she provides a much-needed account of the changing social contexts through which nineteenth-century American women became poets: initially by reading, reciting, writing, and publishing poetry in school, and later, by doing those same things in literary salons, institutions created by the high-culture movement of the day.

Along the way, Loeffelholz provides detailed analyses of the poetry, much of which has received little or no recent critical attention. She focuses on the works of a remarkably diverse array of poets, including Lucretia Maria Davidson, Lydia Sigourney, Maria Lowell, Frances Ellen Watkins Harper, Emily Dickinson, Helen Hunt Jackson, and Annie Fields.

Impeccably researched and gracefully written, From School to Salon moves the study of nineteenth-century women’s poetry to a new and momentous level.

Mary Loeffelholz is Associate Professor of English at Northeastern University and the author of Dickinson and the Boundaries of Feminist Theory.

"This groundbreaking study will no doubt prove influential in shaping critical discourse to come."—Faith Barrett, Legacy

"From School to Salon is exemplary in the clarity with which it both furnishes neglected poets with layered cultural contexts and puts them to use in patient, level-headed unteasings of individual poems. . . . [The book] is full of shrewd, timely judgments and riveting acts of attention."—Debra Fried, New England Quarterly

"In asking us to look at this poetry in its own terms, Loeffelholz is raising important issues not only for understanding this literary past, but just as powerfully for assessing the critical prejudices of our academic present. The author's writing is subtle and graceful; it carries its theoretical sophistication and historical detail lightly, pulling out just the tidbits needed."—Karen Sanchez-Eppler, Amherst College

"By offering precise and substantive evidence for the importance of recognizing the relative autonomy of poetry as a cultural field, From School to Salon undertakes a crucial intervention within nineteenth-century American Studies. It should appeal to a range of readers, including specialists in nineteenth-century American and British literature, African-Americanists, students of women's poetry, and scholars concerned with "recovery" issues in general."—Tricia Lootens, University of Georgia