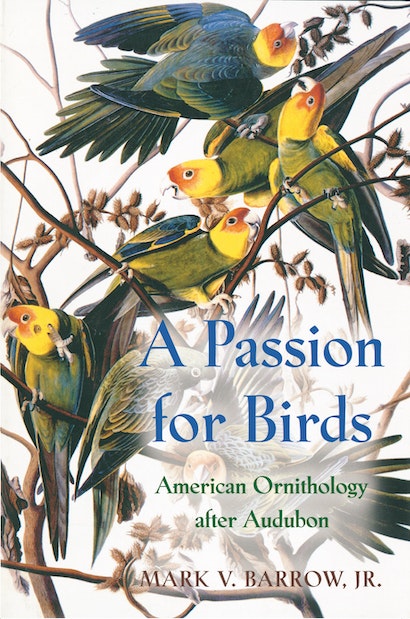 In the decades following the Civil War — as industrialization, urbanization, and economic expansion increasingly reshaped the landscape — many Americans began seeking adventure and aesthetic gratification through avian pursuits. By the turn of the century, hundreds of thousands of middle-and upper-class devotees were rushing to join Audubon societies, purchase field guides, and keep records of the species they encountered in the wild. Mark Barrow vividly reconstructs this story not only through the experiences of birdwatchers, collectors, conservationists, and taxidermists, but also through those of a relatively new breed of bird enthusiast: the technically oriented ornithologist. In exploring how ornithologists struggled to forge a discipline and profession amidst an explosion of popular interest in natural history, A Passion for Birds provides the first book-length history of American ornithology from the death of John James Audubon to the Second World War.


Barrow shows how efforts to form a scientific community distinct from popular birders met with only partial success. The founding of the American Ornithologists’ Union in 1883 and the subsequent expansion of formal educational and employment opportunities in ornithology marked important milestones in this campaign. Yet by the middle of the twentieth century, when ornithology had finally achieved the status of a modern profession, its practitioners remained dependent on the services of birdwatchers and other amateur enthusiasts. Environmental issues also loom large in Barrow’s account as he traces areas of both cooperation and conflict between ornithologists and wildlife conservationists.


Recounting a colorful story based on the interactions among a wide variety of bird-lovers, this book will interest historians of science, environmental historians, ornithologists, birdwatchers, and anyone curious about the historical roots of today’s birding boom.

"Lively drama, complete with colorful characters, harrowing escapes, class struggles and personal triumphs.... I was gripped from cover to cover by this book and gained enormous insights into my roots."—John W. Fitzpatrick, Nature

"In these pages, one senses a palpable kinship between the present birding world and the generations ... who preceded us.... Ironically the subject material seems altogether contemporary, as reflective of our own passion for birds as of that of our predecessors."—Ted Floyd, Birding

"Barrow's entertainingly informative work mines rich veins of archive material, both scientific and lay, in order to chart the special relationship which has developed over the years between the professional ornithologist and the collector, the taxidermist, the conservationist and the amateur birdwatcher."—The Times Literary Supplement

"Barrow's work provides an enormously useful guide to an impressive range of subjects in the history of science, far broader than the subject of the book itself. . . . Highly readable."—Jane R. Camerini, Isis

"History and bird lovers alike will find A Passion for Birds by Mark V. Barrow, Jr. interesting . . . with its colorful story and cast of characters."—Birder's World

"Mark Barrow has written an admirably comprehensive, penetrating, and very readable treatment of the history of ornithology, one that fills a gaping hole in the history of science as well as ornithological literature. This book will surely be the standard account for many years to come."—David E. Allen, author of The Naturalist in Britain: A Social History