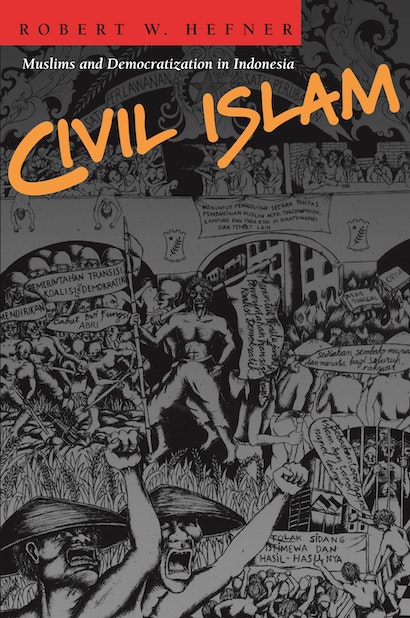 Civil Islam tells the story of Islam and democratization in Indonesia, the world’s largest Muslim nation. Challenging stereotypes of Islam as antagonistic to democracy, this study of courage and reformation in the face of state terror suggests possibilities for democracy in the Muslim world and beyond.


Democratic in the early 1950s and with rich precedents for tolerance and civility, Indonesia succumbed to violence. In 1965, Muslim parties were drawn into the slaughter of half a million communists. In the aftermath of this bloodshed, a “New Order” regime came to power, suppressing democratic forces and instituting dictatorial controls that held for decades. Yet from this maelstrom of violence, repressed by the state and denounced by conservative Muslims, an Islamic democracy movement emerged, strengthened, and played a central role in the 1998 overthrow of the Soeharto regime. In 1999, Muslim leader Abdurrahman Wahid was elected President of a reformist, civilian government.


In explaining how this achievement was possible, Robert Hefner emphasizes the importance of civil institutions and public civility, but argues that neither democracy nor civil society is possible without a civilized state. Against portrayals of Islam as inherently antipluralist and undemocratic, he shows that Indonesia’s Islamic reform movement repudiated the goal of an Islamic state, mobilized religiously ecumenical support, promoted women’s rights, and championed democratic ideals. This broadly interdisciplinary and timely work heightens our awareness of democracy’s necessary pluralism, and places Indonesia at the center of our efforts to understand what makes democracy work.

Robert W. Hefner is Professor of Anthropology at Boston University, where he directs the Program in Civic Culture at the Institute for the Study of Economic Culture. The author of The Political Economy of Mountain Java and Hindu Javanese: Tengger Tradition and Islam (Princeton), he is also editor of Democratic Civility: The Cross-Cultural Possibility of a Modern Political Ideal and Market Cultures: Society and Morality in the New Asian Capitalisms.

"Hefner describes brilliantly the Muslim's role in democratizing, if not civilizing, Indonesia. The work, long overdue, is significant. . . . [Hefner] clearly knows his way around Indonesia and is fully aware of what it means to be an Indonesian."—Dicky Sofjan, Studies in Contemporary Islam

"Robert Hefner's important book, Civil Islam, is the most detailed study of Islam in the Suharto Period to appear to date. . . . Hefner writes with special sympathy on those influential currents in Indonesian Islam."—Martin Van Bruinessen, Times Literary Supplement

"In this book, Robert W. Hefner . . . argues . . . that Islamic states and civil society are compatible, and he adduces considerable evidence from Indonesian political history . . . to make his case. He makes an important contribution to our knowledge of the dynamics of contemporary Islam in Indonesia."—Richard C. Martin, The Journal of Asian Studies

"What is interesting about the text is that despite his training as an anthropologist, Hefner draws on different disciplines such as history, political science and sociology to provide this major contribution to the literature of Indonesia. Anyone interested in the nature of democracy, for instance, should read the brilliant conclusion . . . a powerful warning against civilizational intolerance in the modern world. The challenge of change and, specifically, democratic change within Indonesia and within an Islamic context provides larger meaning in a world so easily dominated by easy and simple assumptions. This text lucidly brings this point to life."—Kenneth Christie, International Affairs

"A powerful and rich study of the micro-foundations of political democracy in Indonesian Islam; its institutions, its practices, its varied beliefs and tumultuous history. Hefner supplies the indispensable sub-structure for a real understanding of 'social capital' and 'civil society."—James C. Scott, Yale University

"This timely book boldly and rigorously tackles one of the most important problems of the post-Cold War world—can the ideal of a democratic, open society be generalized across cultures. To Samuel Huntington's negative, Hefner offers the most convincing response. Civil Islam documents the development of a robust civic tradition where Huntington least expected to find it, in the grossly understudied world of Indonesian Islam. Despite enormous provocation from its enemies, this civil Islam, he shows, has made possible Indonesia's still-fragile democratic transition. His superb book should transform our understanding of Indonesia, of Islam, and of the nature of democratization in a plural world."—Anthony Reid, University of California, Los Angeles

"There is no better voice or book. Robert Hefner's Civil Society is a masterful and compelling account of Muslim politics in contemporary Indonesia."—John L. Esposito, Director, Center for Muslim-Christian Understanding: History and International Affairs, Edmund A. Walsh School of Foreign Service, Georgetown University

"This is a magnificent piece of scholarship that succeeds on a number of levels. Hefner is to be congratulated on his tremendous contributions to the literature on Indonesia and Southeast Asia generally, as well as his deep insights on-and furthering of-myriad debates on politics, religion, civil society, and modernity."—Michael G. Peletz, Colgate University