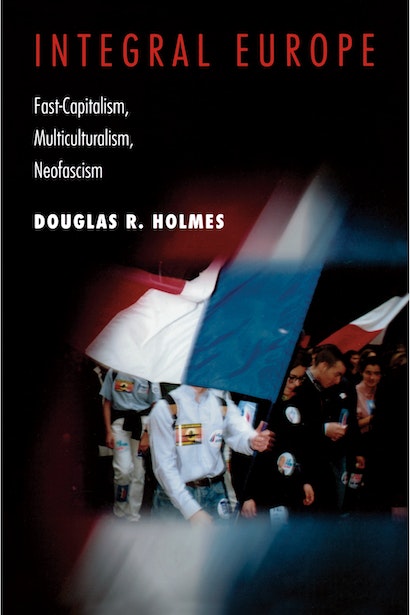 Over the past 15 years, the project of advanced European integration has followed a complex secular and cosmopolitan agenda. As that agenda has evolved, however, so have various hard-line populist movements with goals diametrically opposed to the ideals of a harmonious European Union. Spearheaded by figures such as Jean-Marie Le Pen, the controversial leader of France’s National Front party, these radical movements have become increasingly influential and, because of their philosophical affinities with fascism and national socialism — politically worrisome.


In Integral Europe, anthropologist Douglas Holmes posits that such movements are philosophically rooted in integralism, a sensibility that, in its most benign form, enables people to maintain their ethnic identity and solidarity within the context of an increasingly pluralistic society. Taken to irrational extremes by people like Le Pen, integralism is being used to inflame people’s feelings of alienation and powerlessness, the by-products of impersonal, transnational “fast-capitalism.” The consequences are an invidious politics of exclusion that spawns cultural nationalism, racism, and social disorder.


The analysis moves from northern Italy to Strasbourg and Brussels, the two venues of the European Parliament, and finally to the East End of London. This multi-sited ethnography provides critical perspective on integralism as a form of intimate cultural practice and a violent idiom of estrangement. It combines a wide-ranging review of modern and historical scholarship with two years of field research that included personal interviews with right-wing activists, among them Le Pen and neo-Nazis in inner London. Fascinating, provocative, and sobering, Integral Europe offers a rare inside look at one of modern Europe’s most unsettling political trends.

Douglas R. Holmes teaches social anthropology at the Univesrity of Otago, New Zealand. He is the author of Cultural Disenchantment: Worker Peasantries in Northeast Italy (Princeton).

"The title of this book gives barely a hint of its rich and complex content . . . Highly recommended for all social scientists and policy professionals who work on European political and social issues."—Choice

"Holmes convinces the reader that integralism plays a large role in shaping mainstream political discourse on Europe as well as in bolstering an explicitly fascist and marginal opposition."—Virginia Quarterly Review

"A powerful and disturbing piece of contemporary ethnographic work that will raise many questions and open serious debate."—Paul Rabinow, University of California-Berkeley