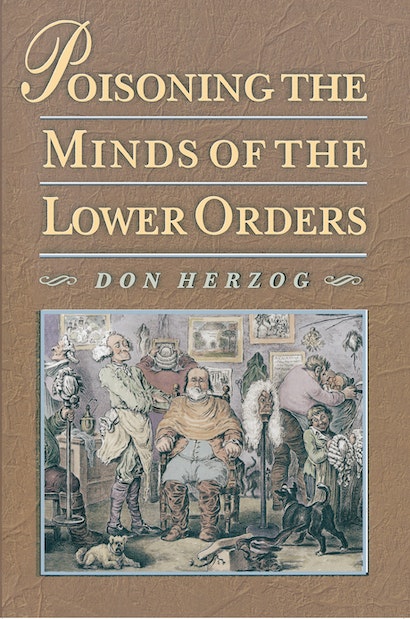 Conservatism was born as an anguished attack on democracy. So argues Don Herzog in this arrestingly detailed exploration of England’s responses to the French Revolution. Poisoning the Minds of the Lower Orders ushers the reader into the politically lurid world of Regency England.


Deftly weaving social and intellectual history, Herzog brings to life the social practices of the Enlightenment. In circulating libraries and Sunday schools, deferential subjects developed an avid taste for reading; in coffeehouses, alehouses, and debating societies, they boldly dared to argue about politics. Such conservatives as Edmund Burke gaped with horror, fearing that what radicals applauded as the rise of rationality was really popular stupidity or worse. Subjects, insisted conservatives, ought to defer to tradition — and be comforted by illusions.


Urging that abstract political theories are manifest in everyday life, Herzog unflinchingly explores the unsavory emotions that maintained and threatened social hierarchy. Conservatives dished out an unrelenting diet of contempt. But Herzog refuses to pretend that the day’s radicals were saints. Radicals, he shows, invested in contempt as enthusiastically as did conservatives. Hairdressers became newly contemptible, even a cultural obsession. Women, workers, Jews, and blacks were all abused by their presumed superiors. Yet some of the lowly subjects Burke had the temerity to brand a swinish multitude fought back.


How were England’s humble subjects transformed into proud citizens? And just how successful was the transformation? At once history and political theory, absorbing and disquieting, Poisoning the Minds of the Lower Orders challenges our own commitments to and anxieties about democracy.

Don Herzog teaches law and political theory at the University of Michigan. He is the author of Without Foundations and Happy Slaves.

"Herzog is a relative rarity among scholarly writers today, in that he self-consciously deflates the pretensions of the academic voice. . . . The . . . story that he tells so masterfully—the transformation of humble subjects into proud citizens—is grand."—The New Republic

"[Herzog] presents a major and stimulating contribution. . . . His study is based on a formidable range of primary sources. . . . But it is not only his learning that is impressive. What greatly adds to the value of this work is Herzog's rigorously intellectual exploration of the ideas and also the motives of the many authors he has read. . . . Exciting and rewarding."—History

"With biting, contemporary wit, Herzog . . . takes us on a tour of the social and political world of Britain between the outbreak of the French Revolution and the passing of the second poor bill."—Virginia Quarterly Review

"A vivid book that recasts familiar political, social and cultural themes and positions in new and compelling ways, and from which students of political culture in any field of history will greatly profit."—Albion M. Urdank, Albion

"Herzog's tone is skeptical, constructively flippant—and, above all, readable . . . I know that many people out there would rather eat one of their own feet than read a supposedly academic work like this; but do give it a go. You'll find it's worth it."—Nicholas Lezard, The Guardian