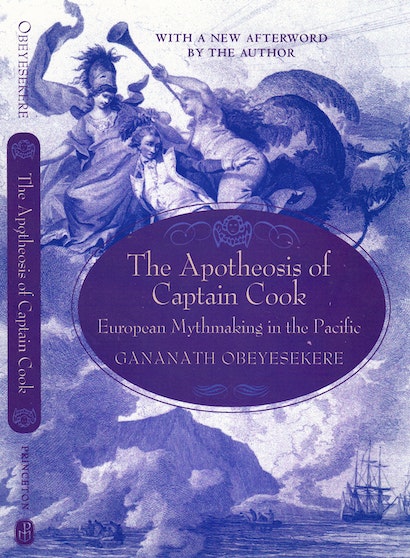 Here Gananath Obeyesekere debunks one of the most enduring myths of imperialism, civilization, and conquest: the notion that the Western civilizer is a god to savages. Using shipboard journals and logs kept by Captain James Cook and his officers, Obeyesekere reveals the captain as both the self-conscious civilizer and as the person who, his mission gone awry, becomes a “savage” himself.

In this new edition of The Apotheosis of Captain Cook, the author addresses, in a lengthy afterword, Marshall Sahlins’s 1994 book, How “Natives” Think, which was a direct response to this work.

Gananath Obeyesekere is Professor of Anthropology at Princeton University. His many books include The Work of Culture: Symbolic Transformation in Psychoanalysis and Anthropology and, with Richard Gombrich, Buddhism Transformed: Religious Change in Sri Lanka (Princeton).

"In The Apotheosis of Captain Cook, a fascinating and important book, Gananath Obeyesekere ... examines the murder and the events leading up to it in a fresh way. He enlarges the debate about how we think not only about our own diminishing collection of heroes, but also about the outsiders of European history, in this case the eighteenth-century Hawaiians."—Robert I. Levy, The New York Times Book Review

"Without question the most provocative reassessment of the famed explorer's demise.... Obeyesekere has made a persuasive case for his counternarrative of Captain Cook, strongly supporting it with a fine-grained analysis of an impressive array of cultural material, some of it long submerged."—Amy Burce, The Sciences

"There are so many ways of patronizing the past, [Obeyesekere] as good as says, and one of them is to accept your own culture's version of it. For this reason alone, his book would be stimulating. But there is more, much of it centering around the personality of James Cook himself. That familiar, Queegish figure of a ship's master obsessed with theft, increasingly unhinged by whatever private ghosts ... is surely worth examining."—James Hamilton-Paterson, The New Republic

"A fascinating and important book . . . Obeyesekere examines [Cook's] murder and the events leading up to it in a fresh way."—Robert L. Levy, The New York Times Book Review

"The whole book is admirable, impeccable, even at times brilliant."—Simon Schama, The Washington Times