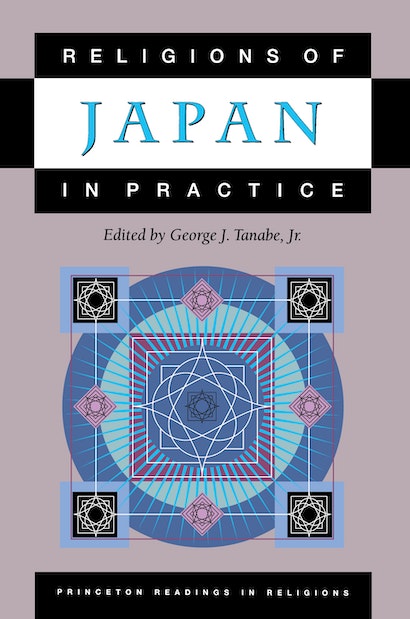 This anthology reflects a range of Japanese religions in their complex, sometimes conflicting, diversity. In the tradition of the Princeton Readings in Religions series, the collection presents documents (legends and miracle tales, hagiographies, ritual prayers and ceremonies, sermons, reform treatises, doctrinal tracts, historical and ethnographic writings), most of which have been translated for the first time here, that serve to illuminate the mosaic of Japanese religions in practice.


George Tanabe provides a lucid introduction to the “patterned confusion” of Japan’s religious practices. He has ordered the anthology’s forty-five readings under the categories of “Ethical Practices,” “Ritual Practices,” and “Institutional Practices,” moving beyond the traditional classifications of chronology, religious traditions (Shinto, Confucianism, Buddhism, etc.), and sects, and illuminating the actual orientation of people who engage in religious practices. Within the anthology’s three broad categories, subdivisions address the topics of social values, clerical and lay precepts, gods, spirits, rituals of realization, faith, court and emperor, sectarian founders, wizards, and heroes, orthopraxis and orthodoxy, and special places. Dating from the eighth through the twentieth centuries, the documents are revealed to be open to various and evolving interpretations, their meanings dependent not only on how they are placed in context but also on how individual researchers read them. Each text is preceded by an introductory explanation of the text’s essence, written by its translator. Instructors and students will find these explications useful starting points for their encounters with the varied worlds of practice within which the texts interact with readers and changing contexts.

Religions of Japan in Practice is a compendium of relationships between great minds and ordinary people, abstruse theories and mundane acts, natural and supernatural powers, altruism and self-interest, disappointment and hope, quiescence and war. It is an indispensable sourcebook for scholars, students, and general readers seeking engagement with the fertile “ordered disorder” of religious practice in Japan.

George J. Tanabe, Jr., is Professor and Chair in the Department of Religion at the University of Hawaii. Having research interests covering doctrinal and practical issues in medieval and modern Japan, he is the author of MyÉe the Dreamkeeper, coeditor of The Lotus Sutra in Japanese Culture, and coauthor of Practically Religious: Worldly Benefits and the Common Religion of Japan.

"An enormous undertaking . . . its value to those in the field of comparative religions is undeniable."—Library Journal

"One of the finest anthologies available of primary documents illustrating the diversity and liveliness of Japanese religions."—Publishers Weekly

"Religions of Japan in Practice demonstrates the wide variety of topics and source materials being studied by current scholars of Japan. More important, its very diversity demands that we rethink scholarly categories and boundaries within the field of Japanese religious studies. Both teachers and students will find much that is new and fascinating."—William M. Bodiford, University of California, Los Angeles