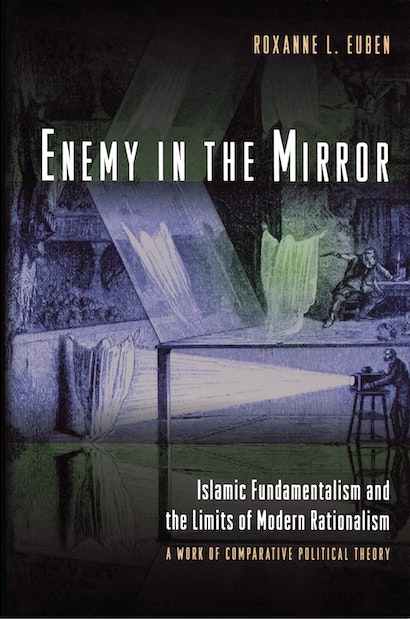 A firm grasp of Islamic fundamentalism has often eluded Western political observers, many of whom view it in relation to social and economic upheaval or explain it away as an irrational reaction to modernity. Here Roxanne Euben makes new sense of this belief system by revealing it as a critique of and rebuttal to rationalist discourse and post-Enlightenment political theories. Euben draws on political, postmodernist, and critical theory, as well as Middle Eastern studies, Islamic thought, comparative politics, and anthropology, to situate Islamic fundamentalist thought within a transcultural theoretical context. In so doing, she illuminates an unexplored dimension of the Islamist movement and holds a mirror up to anxieties within contemporary Western political thought about the nature and limits of modern rationalism — anxieties common to Christian fundamentalists, postmodernists, conservatives, and communitarians.


A comparison between Islamic fundamentalism and various Western critiques of rationalism yields formerly uncharted connections between Western and Islamic political thought, allowing the author to reclaim an understanding of political theory as inherently comparative. Her arguments bear on broad questions about the methods Westerners employ to understand movements and ideas that presuppose nonrational, transcendent truths. Euben finds that first, political theory can play a crucial role in understanding concrete political phenomena often considered beyond its jurisdiction; second, the study of such phenomena tests the scope of Western rationalist categories; and finally, that Western political theory can be enriched by exploring non-Western perspectives on fundamental debates about coexistence.

"[A] piercing book, lending the reader insights into the complex intermingling of religious and political ideas that are separate in the Western mind, but which form a spiritual union under Islam."—John A. C. Greppin, The Boston Book Review

"Enemy in the Mirror offers an astute interdisciplinary study that calls on Western scholarship to take a short (irrational?) break from its instrumental rationality. This might help it to see that the scary face of Enemy/Other is depicted in a mirror that the modern rationality, for centuries, has held in front of its own face."—Alireza Shomali, International Journal of Middle East Studies

"Enemy in the Mirror is a necessary corrective to a good deal of ill-considered polemic, one that has important implications for understanding all types of fundamentalism. Roxanne Euben makes convincing arguments, encouraging the reader to reconsider the origins of modern rationalism and anti-rationalism. Her insistence that political theory open its doors to consideration of questions drawn from other cultures is also saluta0ry and long overdue."—Edmund Burke, III, University of California, Santa Cruz

"Roxanne Euben's argument that one should analyze Islamic fundamentalist thought not only for its function but also for its meaning—the intrinsic value of its ideas—is valid and absolutely timely. Enemy in the Mirror is a well-researched and impressive contribution to the analysis of Islamic political thought and to comparative political philosophy."—Seyla Benhabib, Harvard University