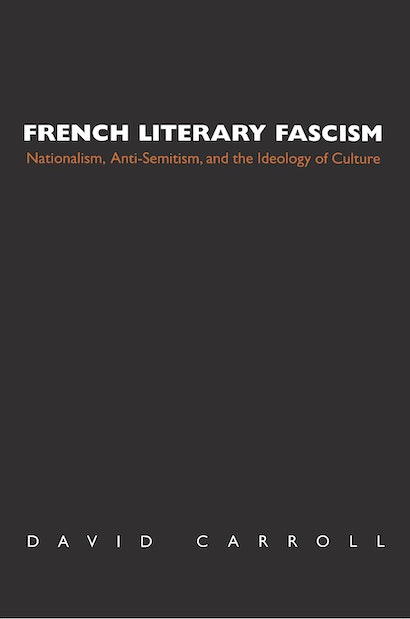 This is the first book to provide a sustained critical analysis of the literary-aesthetic dimension of French fascism — the peculiarly French form of what Walter Benjamin called the fascist “aestheticizing of politics.” Focusing first on three important extremist nationalist writers at the turn of the century and then on five of the most visible fascist intellectuals in France in the 1930s, David Carroll shows how both traditional and modern concepts of art figure in the elaboration of fascist ideology — and in the presentation of fascism as an art of the political.


Carroll is concerned with the internal relations of fascism and literature — how literary fascists conceived of politics as a technique for fashioning a unified people and transforming the disparate elements of society into an organic, totalized work of art. He explores the logic of such aestheticizing, as well as the assumptions about art, literature, and culture at the basis of both the aesthetics and politics of French literary fascists. His book reveals how not only classical humanism but also modern aesthetics that defend the autonomy and integrity of literature became models for xenophobic forms of nationalism and extreme “cultural” forms of anti-Semitism. A cogent analysis of the ideological function of literature and culture in fascism, this work helps us see the ramifications of thinking of literature or art as the truth or essence of politics.

David Carroll is Professor of French and Chair of the Department of French and Italian at the University of California, Irvine. His previous publications include Paraesthetics: Foucault, Lyotard, Derrida and The Subject in Question: The Languages of Theory and the Strategies of Fiction.

"What interests [Carroll] is fascist ideology and fascist aesthetics, and the relationship between literature and political extremism in general and anti-Semitism in particular. Where some champions of these writers have attempted to separate their writing from their politics, Carroll argues powerfully that it was precisely their faith in art and literature which led them to identify with fascism."—James F. McMillan, The Times Literary Supplement

"A crisp and compelling narrative.... [This] is a book that all scholars of French fascism will have to take seriously."—William D. Irvine, American Historical Review

"That some of the heirs of Voltaire espoused Fascism is one of the great tragedies of French literature. Caroll . . . demonstrates in depth how these brilliant, intelligent, and frequently creative writers, after only the slightest shift of viewpoint, turned nationalist politics into a violent, aggressive, antisocial, terrifying absolute, and vicious alternative to democracy. This is the definitive work on a tragic subject."—Choice

"What stands out is the author's critical intelligence and principled fairness. Although Carroll clearly detests the writings of his subjects, he never loses sight of his project, nor does he diminish the impact of his findings by veering into polemic. Readers interested in the always contemporary debate surrounding anti-hate legislation and freedom of expression will find French Literary Fascism a fascinating read."—Erna Paris, Toronto Globe and Mail