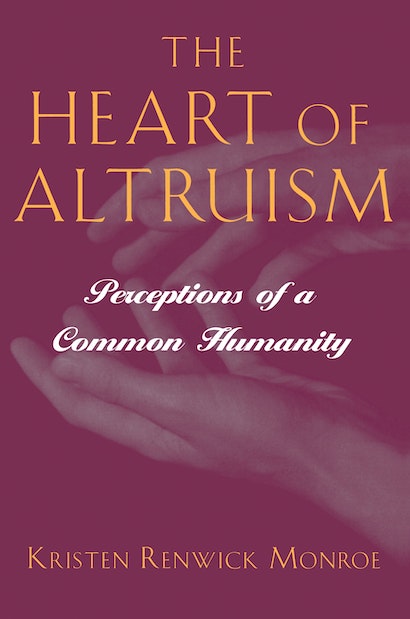 Is all human behavior based on self-interest? Many social and biological theories would argue so, but such a perspective does not explain the many truly heroic acts committed by people willing to risk their lives to help others. In The Heart of Altruism, Kristen Renwick Monroe boldly lays the groundwork for a social theory receptive to altruism by examining the experiences described by altruists themselves: from Otto, a German businessman who rescued over a hundred Jews in Nazi Germany, to Lucille, a newspaper poetry editor, who, armed with her cane, saved a young girl who was being raped. Monroe’s honest and moving interviews with these little-known heroes enable her to explore the causes of altruism and the differences between altruists and other people. By delineating an overarching perspective of humanity shared by altruists, Monroe demonstrates how social theories may begin to account for altruism and debunks the notions of scientific inevitability that stem from an overemphasis on self-interest.


As Monroe has discovered, the financial and religious backgrounds of altruists vary greatly — as do their views on issues such as welfare, civil rights, and morality. Altruists do, however, share a certain way of looking at the world: where the rest of us see a stranger, altruists see a fellow human being. It is this perspective that many social theories overlook. Monroe restores altruism to a general theory of ethical political behavior. She argues that to understand what makes one person act out of concern for others and not the self, we need to ask how that individual’s perspective sets the range of options he or she finds available.

Kristen Renwick Monroe is Professor of Politics and Associate Director of the Program in Political Psychology at the University of California, Irvine. She is the author of Presidential Popularity and the Economy and editor of The Economic Approach to Politics: A Critical Reassessment of the Theory of Rational Action and The Political Process and Economic Change.

"Monroe elegantly shows that altruism is not one simple thing, but many distinct things, and that ... [it] is not adequately captured by models based on rational self-interest."—Martha C. Nussbaum, The New Republic

"In her adventurous new book ... Monroe takes mainstream economics, psychology, and evolutionary biology to task for assuming self-interest is the key to human behavior.... The Heart of Altruism is an important achievement, for it sketches a partial route past the whirlpool of selfishness."—Michael Collins, The New Leader

"Analytically brilliant and extremely moving. [Monroe's] case studies are gripping and her demonstration of the actual existence of altruism, in contrast to self-interested behavior. . ., is wholly convincing."—Albert O. Hirschman, Institute for Advanced Study, Princeton