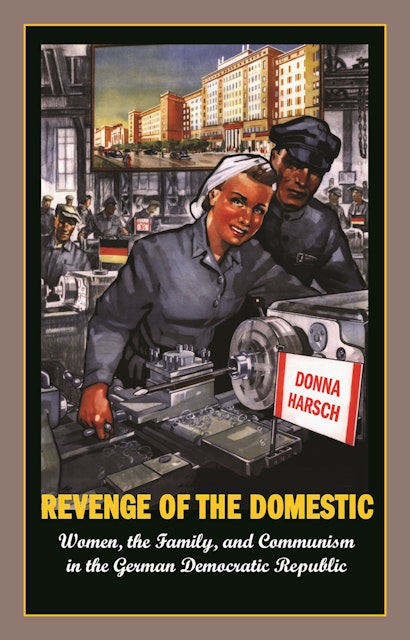 Revenge of the Domestic examines gender relations in East Germany from 1945 to the 1970s, focusing especially on the relationship between ordinary women, the Communist Party, and the state created by the Communists, the German Democratic Republic (GDR). The book weaves together personal stories from interviews, statistical material, and evidence from archival research in Berlin, Potsdam, Leipzig, Merseburg, and Chemnitz to reconstruct the complex interplay between state policy toward women and the family on the one hand, and women’s reactions to policy on the other. Donna Harsch demonstrates that women resisted state decisions as citizens, wageworkers, mothers, wives, and consumers, and that in every guise they maneuvered to overcome official neglect of the family.


As state dependence on female employment increased, the book shows, the Communists began to respond to the insistence of women that the state pay attention to the family. In fits and starts, the party state begrudgingly retooled policy in a more consumerist and family-oriented direction. This “domestication” was partial, ambivalent, and barely acknowledged from above. It also had ambiguous, arguably regressive, effects on the private gender arrangements and attitudes of East Germans. Nonetheless, the economic and social consequences of this domestication were cumulatively powerful and, the book argues, gradually undermined the foundations of the GDR.

Donna Harsch is professor of history at Carnegie Mellon University. She specializes in twentieth-century German history.

"Harsch's new book is a valuable contribution to the burgeoning historiography of the German Democratic Republic (GDR). Looking primarily at the developments during the course of the 1950s, she analyzes the ways that the East German leadership viewed gender issues. . . . Harsch's detailed analysis assures that her book provides valuable insight into the social history of the GDR and the failure of 'real-existing socialism.'"—R.W. Lemmons, Choice

"This book . . . is not for the novice. However, it is indispensable for any one else interested in the nature of state socialism, the preconditions of its collapse, and gender."—Lora Wildenthal, Labor History

"Donna Harsch has written a terrific book, the focus of which is the often confrontational relationship between East German women and the German Democratic Republic (GDR) from the immediate postwar years to the 1970s."—Irene Guenther, American Historical Review

"Overall, the book is a compelling contribution to women's history, richly illustrating, through women's agency, the continuous intersections between work, family, consumption, and household. As a gender study, it traces their reverberations for women and men at the level of state decision making, the factory floor, the judicial sphere, and the shopping queue."—Jean H. Quataert, Journal of Modern History

"This is a major work not to be missed by those interested in GDR history. The book's readability (despite its complexity) would also make it a good choice for course adoptions on the advanced undergraduate and graduate levels."—Dolores L. Augustine, Journal of Social History

"No other historian, writing in German or English, has examined women in early East Germany in such detail. Revenge of the Domestic will become a standard work on East German women, a starting point for all further writing on the subject."—Elizabeth Heineman, University of Iowa

"Revenge of the Domestic is an excellent work of historical scholarship that offers profound insight into the workings of the state socialist system in East Germany. Donna Harsch shows—and does not just assert—that gender constantly shaped the politics and society of East Germany. She also shows how women themselves were changed by forty years of communism."—Eric Weitz, University of Minnesota