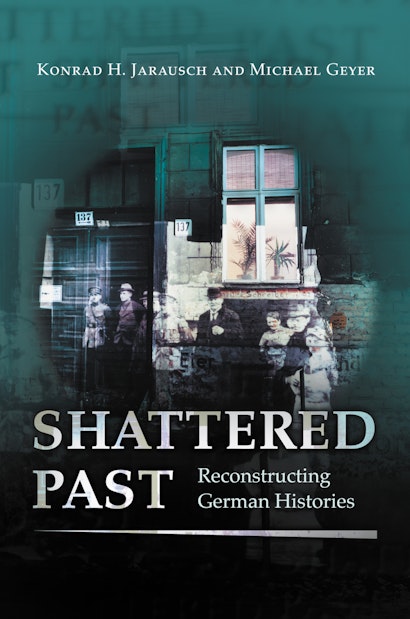 Broken glass, twisted beams, piles of debris — these are the early memories of the children who grew up amidst the ruins of the Third Reich. More than five decades later, German youth inhabit manicured suburbs and stroll along prosperous pedestrian malls. Shattered Past is a bold reconsideration of the perplexing pattern of Germany’s twentieth-century history. Konrad Jarausch and Michael Geyer explore the staggering gap between the country’s role in the terrors of war and its subsequent success as a democracy. They argue that the collapse of Communism, national reunification, and the postmodern shift call for a new reading of the country’s turbulent development, one that no longer suggests continuity but rupture and conflict.


Comprising original essays, the book begins by reexamining the nationalist, socialist, and liberal master narratives that have dominated the presentation of German history but are now losing their hold. Treated next are major issues of recent debate that suggest how new kinds of German history might be written: annihilationist warfare, complicity with dictatorship, the taming of power, the impact of migration, the struggle over national identity, redefinitions of womanhood, and the development of consumption as well as popular culture. The concluding chapters reflect on the country’s gradual transition from chaos to civility. This penetrating study will spark a fresh debate about the meaning of the German past during the last century.


There is no single master narrative, no Weltgeist, to be discovered. But there is a fascinating story to be told in many different ways.

Konrad H. Jarausch is Lurcy Professor of European Civilization at the University of North Carolina at Chapel Hill and Director of the Zentrum für Zeithistorische Forschung in Potsdam, Germany. He is the author of Students, Society, and Politics in Imperial Germany (Princeton), The Unfree Professions, and The Rush to German Unity. Michael Geyer is Professor of History at the University of Chicago. Well known for his research in military history and in theoretical and methodological problems in European and world history, he is a co-editor of Resistance Against the Third Reich, 1933–1990. He has published widely on war and violence, twentieth-century German history, as well as the history of globalization and is, most recently, the editor of The Power of Intellectuals in Contemporary Germany.

"An excellent introduction to newly emerging views on the study of contemporary German history."—Cecil Trice, History: Reviews of New Books

"Shattered Past is the most important book in German history to appear in recent years. . . . [It] will surely provoke discussion and debate for many years to come."—Eric D. Weitz, Slavic Review

"This is an important and thought-provoking book, full of insights and critical questions. Its originality will be recognized immediately, and its suggestions for future research will inspire and animate debate. Immensely valuable, it is full of promise for the way we think about the German past over the next decade."—Rudy Koshar, University of Wisconsin, Madison

"This is an extremely important book. The authors move with tremendous authority over two hundred years and use the caesura of 1989 and the experience of the East German dictatorship as well as the racial civil war of the Nazi period to insist on new ways of looking and writing. Their ability to hold the two lines of inquiry together—the disruptions of history and the continually disrupted writing of history—is a masterpiece of conceptual control. Bold and provocative, Shattered Past will stand as a landmark in the field."—Peter Fritzsche, University of Illinois, Urbana-Champaign