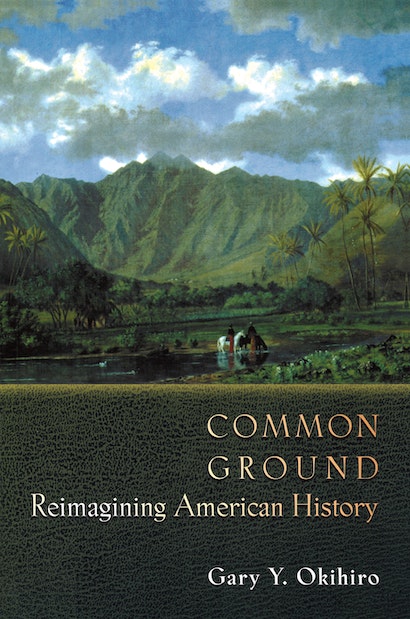 In Common Ground, Gary Okihiro uses the experiences of Asian Americans to reconfigure the ways in which American history can be understood. He examines a set of binaries — East and West, black and white, man and woman, heterosexual and homosexual — that have structured the telling of our nation’s history and shaped our ideas of citizenship since the late nineteenth century. Okihiro not only exposes the artifice of these binaries but also offers a less rigid and more embracing set of stories on which to ground a national history. Influenced by European hierarchical thinking in the late nineteenth and early twentieth centuries, Anglo Americans increasingly categorized other newcomers to the United States. Binaries formed in the American imagination, creating a sense of coherence among white citizens during times of rapid and far-reaching social change. Within each binary, however, Asian Americans have proven disruptive: they cannot be fully described as either Eastern or Western; they challenge the racial categories of black and white; and within the gender and sexual binaries of man and woman, straight and gay, they have been repeatedly positioned as neither nor.

Okihiro analyzes how groups of people and numerous major events in American history have generally been depicted, and then offers alternative representations from an Asian-American viewpoint — one that reveals the ways in which binaries have contributed toward simplifying, excluding, and denying differences and convergences. Drawing on a rich variety of sources, from the Chicago Exposition of 1898 to The Wizard of Oz, this book is a provocative response to current debates over immigration and race, multiculturalism and globalization, and questions concerning the nature of America and its peoples. The ideal foil to conventional surveys of American history, Common Ground asks its readers to reimagine our past free of binaries and open to diversity and social justice.

Gary Y. Okihiro is Professor of International and Public Affairs and Director of the Center for the Study of Ethnicity and Race at Columbia University. He has published several books in American and African history, including Cane Fires: The Anti-Japanese Movement in Hawaii, 1865-1945; Margins and Mainstreams: Asians in American History and Culture; and A Social History of the Bakwena and Peoples of the Kalahari of Southern Africa, 19th Century. He is a past president of the Association for Asian American Studies and the recipient of the lifetime achievement award from the American Studies Association.

"[Common Ground] should take its place . . . as a standard reference. Deftly referencing The Wonderful Wizard of Oz, Chicago's 1893 World's Columbian Exposition, Madame Butterfly (Puccini's opera and the modern play,) his own childhood experiences . . . and other richly varied illustrations, Okihiro offers important insights. . . . A must read."—Choice

"Okihiro is a masterly stylist, able to interweave theoretical insight and historical argument in language that is at once sophisticated and colloquial. Individually these essays are fully complete, but read consecutively they assume an added resonance and depth. In this regard, Common Ground is in a class all its own."—Louise M. Newman, Journal of American History

"An enjoyable, lively destruction of pet American binaries. By reading old stories with new lenses, Gary Okihiro brings about a different understanding of the shaping forces of American history—its life as a Pacific as well as Atlantic world, as a perpetually unstable racial system, and as an erotically charged, unstable, racialized sexual system. Common Ground is well written, full of engaging and accessible stories, and thought provoking in the best sense of the word."—Sarah Deutsch, University of Arizona

"Common Ground is a book that students of American history need to read. It is an engaging intellectual enterprise in the forefront of the important new work in American Studies."—Clyde A. Milner II, Utah State University

"An inventive counter-narrative of U.S. history for readers interested in ethnic studies. Common Ground allows for a much richer appreciation of the complexities of American culture, the hybrid character of many historical themes, and the interconnections among categories usually thought discrete and separate."—Sean Wilentz, Princeton University