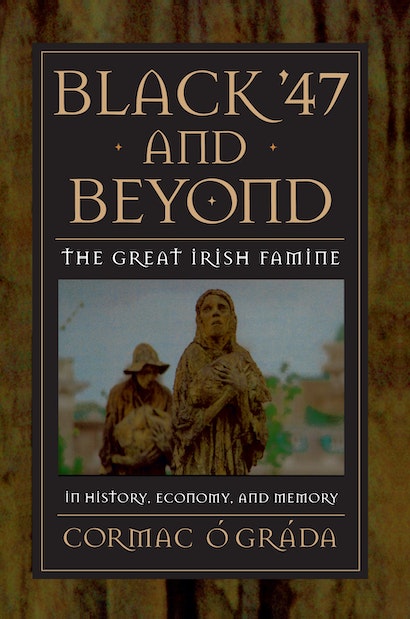 Here Ireland’s premier economic historian and one of the leading authorities on the Great Irish Famine examines the most lethal natural disaster to strike Europe in the nineteenth century. Between the mid-eighteenth and early-nineteenth centuries, the food source that we still call the Irish potato had allowed the fastest population growth in the whole of Western Europe. As vividly described in Ó Gráda’s new work, the advent of the blight phytophthora infestans transformed the potato from an emblem of utility to a symbol of death by starvation. The Irish famine peaked in Black ‘47, but it brought misery and increased mortality to Ireland for several years.


Central to Irish and British history, European demography, the world history of famines, and the story of American immigration, the Great Irish Famine is presented here from a variety of new perspectives. Moving away from the traditional narrative historical approach to the catastrophe, Ó Gráda concentrates instead on fresh insights available through interdisciplinary and comparative methods. He highlights several economic and sociological features of the famine previously neglected in the literature, such as the part played by traders and markets, by medical science, and by migration. Other topics include how the Irish climate, usually hospitable to the potato, exacerbated the failure of the crops in 1845-1847, and the controversial issue of Britain’s failure to provide adequate relief to the dying Irish.


Ó Gráda also examines the impact on urban Dublin of what was mainly a rural disaster and offers a critical analysis of the famine as represented in folk memory and tradition.


The broad scope of this book is matched by its remarkable range of sources, published and archival. The book will be the starting point for all future research into the Irish famine.

Cormac Ó Gráda is Professor of Economics at University College, Dublin. His most recent works include Ireland: A New Economic History and A Rocky Road: The Irish Economy since the 1920s.

"One of the book's great strengths is the attempt to place the Irish experience in the contexts of famines in other parts of the world and to compare it to other historical famines, an approach that enriches Irish and general famine studies alike. . . . Black '47 and Beyond is a substantial and often pioneering contribution to the ever-burgeoning field of Irish Famine studies."—Times Literary Supplement

"One of the most challenging, original, and readable accounts of the subject to have appeared in the last decade. It contains a fund of ideas and information for both experts and those with only the most general knowledge of the famine. . . . Highly recommended."—Choice

"At a stroke, Cormac Ó Gráda's Black '47 and Beyond . . . Establishes itself as the definitive work on the famine. Indeed, it is hard to imagine a better study. . . . [It] is staggering in its thoroughness."—Kevin Driscoll, The Washington Times

"Rigor and meticulousness may be found in Black '47 and Beyond. Ó Gráda holds up to scrutiny each vexed aspect of the Famine and their previous interpretations. The book is both dense and revelatory. . . . The tragedy of the Irish Famine was ultimately the result of a population explosion, of economic backwardness aggravated by political repression, of ideological block-headedness and complacency. It changed Irish society, but its effects reached well beyond that, to Britain's colonies and to the United States."—Katherine A. Powers, The Boston Globe

"A most impressive, even brilliant, work."—Paul Bew, The Spectator

"Rigor and meticulousness may be found in Black '47 and Beyond. Ó Gráda . . . Holds up to scrutiny each vexed aspect of the Famine and their previous interpretations. The book is both dense and revelatory."—Katherine A. Powers, The Boston Sunday Globe

"Cormac Ó Gráda, Ireland's most distinguished, prolific and wide-ranging economic historian, offers us a choice selection of six chapters. . . . The great value of the book lies in pushing the boundary of Irish famine studies beyond their accustomed limits and by including suggestive comparative references to famines in other times and places. By concentrating on a few topics, Ó Gráda can share with the reader the wealth of his broad scholarship and technical mastery."—Barbara Solow, The Times Higher Education Supplement

"Ó Gráda has for a number of years been recognized as the leading economic historian of the Irish Famine. This book will immediately be seen as by far the best economic history ever published on the subject, and will remain for decades the best place to start if you want to read something about the Famine. It combines clear, sound economic reasoning with an interdisciplinary approach and an accessible writing style."—Timothy W. Guinnane, Yale University

"This book is a gem of comparative history on the subject of the Great Irish Famine. It displays a knowledge that is at once deep and broad. The author's comparison of Ireland to other societies is particularly apposite, revealing the fact that he is not just the leading economic historian of his own country but also an expert scholar of global history."—Joel Mokyr, Northwestern University