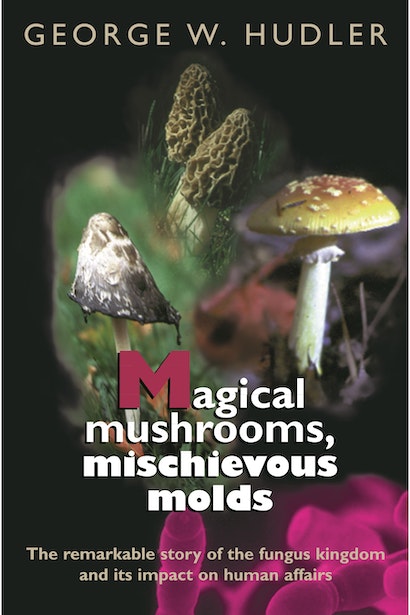 Mushrooms magically spew forth from the earth in the hours that follow a summer rain. Fuzzy brown molds mischievously turn forgotten peaches to slime in the kitchen fruit bowl. And in thousands of other ways, members of the kingdom Fungi do their part to make life on Earth the miracle that it is. In this lively book, George Hudler leads us on a tour of an often-overlooked group of organisms, which differ radically from both animals and plants. Along the way the author stops to ponder the marvels of nature and the impact of mere microbes on the evolution of civilization. Nature’s ultimate recyclers not only save us from drowning in a sea of organic waste, but also provide us with food, drink, and a wide array of valuable medicines and industrial chemicals.


Some fungi make deadly poisons and psychedelic drugs that have interesting histories in and of themselves, and Hudler weaves tales of those into his scientific account of the nature of the fungi. The role of fungi in the Irish potato famine, in the Salem Witch Trials, in the philosophical writings of Greek scholars, and in the creation of ginger snaps are just a few of the many great moments in history to grace these pages.


Hudler moves so easily from discussing human history to exploring scientific knowledge, all with a sense of humor and enthusiasm, that one can well understand why he is an award-winning teacher both at Cornell University as well as nationally. Few, for instance, who read his invitation to “get out of your chair and take a short walk” will ever again look without curiosity and admiration at the “rotten” part of the world around them. Magical Mushrooms, Mischievous Molds is full of information that will satisfy history buffs, science enthusiasts, and anyone interested in nature’s miracles. Everyone in Hudler’s audience will develop a new appreciation of the debt they owe to the molds for such common products as penicillin, wine, and bread.

George W. Hudler is Professor of Plant Pathology at Cornell University. In addition to teaching courses on plant disease diagnosis and management, he offers a course that has the same name as this book. It is one of the most popular undergraduate courses at Cornell, consistently attracting over three hundred students. Since 1992, he has been editor of Branching Out, a biweekly newsletter to guide tree care professionals in the northeastern United States in choosing the best times and least hazardous means for managing insect and disease pests in residential landscapes.

"An utterly delightful book that can be read by anyone who can hardly tell a shiitake from a morel. . . . Hudler makes an excellent brief on behalf of the fungi."—The New York Times Book Review

"Thoroughly entertaining. . . . Hudler takes readers on an enthralling and informative tour of this much maligned kingdom."—Publishers Weekly

"George Hudler is clearly in love with his subject . . . he translates his fascination for all things fungal into a joyful and intelligent read. . . . People who normally shun biology should find it difficult to resist."—New Scientist

"[Hudler] presents a remarkable story of the fungi and their impact on human affairs in a highly readable style that will appeal to all. . . . A joy to read."—Choice

"Unseen, misunderstood, or regarded with suspicion, we cannot escape [fungi's] influence. [Hudler] explains why in this most readable book."—Nature

"Hudler is infectiously—and sometimes amusingly—enthusiastic about his subject, cheering on those who have paid fungi the attention they deserve and castigating those who have ignored them. The result is informative and entertaining popular science. It will be of particular interest to those who pick their own mushrooms or brew their own beer, activities Hudler writes about at length, but it should appeal quite broadly."—Danny Yee, Danny Reviews

"Hudler's light-hearted approach to the subject of the impact of fungi on human history is refreshing and will attract students and lay people who have some interest in this area. Better yet, it will entice readers who were not concerned with this topic at all before delving into the book. . . . [Hudler] is to be commended for discovering some extremely exciting information, some of it little known even to mycologists."—James W. Kimbrough, University of Florida