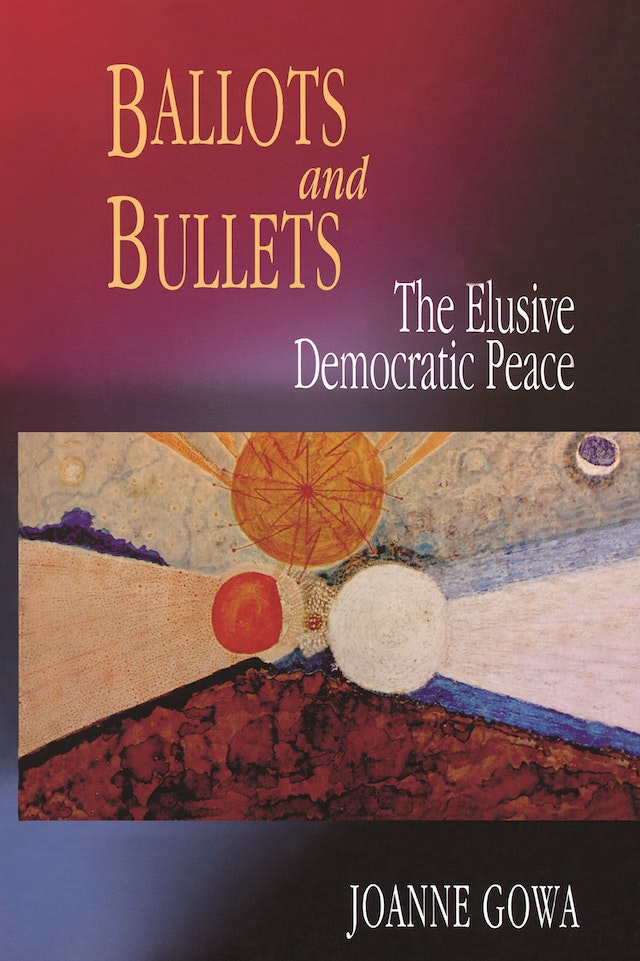 There is a widespread belief, among both political scientists and government policymakers, that “democracies don’t fight each other.” Here Joanne Gowa challenges that belief. In a thorough, systematic critique, she shows that, while democracies were less likely than other states to engage each other in armed conflicts between 1945 and 1980, they were just as likely to do so as were other states before 1914. Thus, no reason exists to believe that a democratic peace will survive the end of the Cold War. Since U.S. foreign policy is currently directed toward promoting democracy abroad, Gowa’s findings are especially timely and worrisome.


Those who assert that a democratic peace exists typically examine the 1815-1980 period as a whole. In doing so, they conflate two very different historical periods: the pre-World War I and post-World War II years. Examining these periods separately, Gowa shows that a democratic peace prevailed only during the later period. Given the collapse of the Cold War world, her research calls into question both the conclusions of previous researchers and the wisdom of present U.S. foreign policy initiatives.


By re-examining the arguments and data that have been used to support beliefs about a democratic peace, Joanne Gowa has produced a thought-provoking book that is sure to be controversial.

Joanne Gowa is Professor of World Politics of Peace and War at Princeton University. She is the author of Allies, Adversaries, and International Trade (Princeton) and Closing the Gold Window: Domestic Politics and the End of Bretton Woods.

"This book is an important contribution to the evolving literature on the democratic peace. Gowa demonstrates that the absence of war among democracies is a recent phenomenon at best, and one that is due more to shared strategic interests than to common domestic characteristics. Her analysis also suggests that promoting democracy, is a dubious foundation for contemporary U.S. foreign policy."—Stephen Walt, University of Chicago

"In the 1990s, the democratic peace, has been influential in guiding U.S. policymakers as well as scholars of international relations. In this elegantly argued and well-researched book Joanne Gowa focuses with laser-like precision on the arguments underlying received wisdom and brilliantly calls them into question. Ballots and Bullets argues that the democratic peace is just as exceptional as the Cold War that gave rise to it. Those interested in contemporary U.S. diplomacy and international relations theory will debate vigorously this challenging and important book."—Peter Katzenstein, Walter S. Carpenter, Jr. Professor of International Studies, Cornell University

"The democratic peace hypothesis has generated scholarly battles and steady scientific progress over a quarter century. Yet, in Ballots and Bullets, Joanne Gowa has built a compelling case that we posed the question and constructed the analyses incorrectly from the start—that in fact the democratic peace is merely an artifact of the Cold War. For policymakers, the stakes are extremely high. For scholars, the battle has just begun anew."—Gary King, Harvard University, and author of A Solution to the Ecological Inference Problem: Reconstructing Individual Behavior from Aggregate Data

"This is a depressingly good book. One of the few robust empirical relations we thought we had in international relations was that democratic states rarely if ever fight each other. In this provacative book, Professor Gowa undermines the democratic peace-thesis and offers a more persuasive interest-based alternative that fits the data better. This book has important theoretical and policy implications."—Robert Powell, University of California, Berkeley