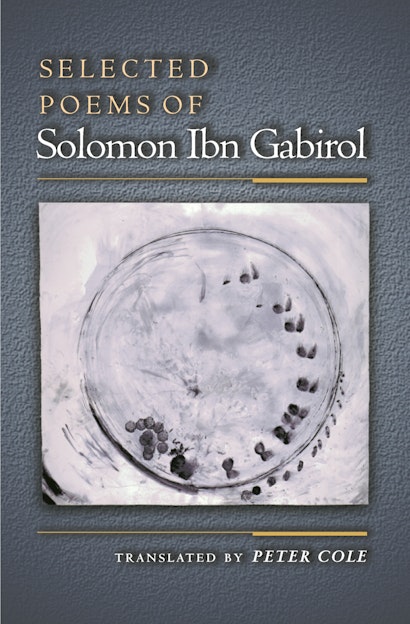 Poet, philosopher, and sensitive misanthrope, a spectacular fly in the ointment of the refined eleventh-century Andalusian-Jewish elite, Solomon Ibn Gabirol comes down to us as one of the most complicated intellectual figures in the history of post-biblical Judaism. Unlike his worldly predecessor Shmuel HaNagid, the first important poet of the period, Ibn Gabirol was a reclusive, mystically inclined figure whose modern-sounding medieval poems range from sublime descriptions of the heavenly spheres to poisonous jabs at court life and its pretenders. His verse, which demonstrates complete mastery of the classicizing avant-garde poetics of the day, grafted an Arabic aesthetic onto a biblical vocabulary and Jewish setting, taking Hebrew poetry to a level of metaphysical sophistication and devotional power it has not achieved since.


Peter Cole’s selection includes poems from nearly all of Ibn Gabirol’s secular and liturgical lyric genres, as well as a complete translation of the poet’s long masterwork, “Kingdom’s Crown.” Cole’s rich, inventive introduction places the poetry in historical context and charts its influence through the centuries. Extensive annotations accompany the poems. This companion volume to Peter Cole’s critically acclaimed Selected Poems of Shmuel HaNagid presents the first comprehensive selection of Ibn Gabirol’s verse to be published in English and brings to life an astonishing body of poetry by one of the greatest Jewish writers of all time.

Peter Cole has published two volumes of poems and six volumes of translation from medieval and contemporary Hebrew and Arabic. He has received numerous awards for his work, including fellowships from the NEA and the NEH, and for his Selected Poems of Shmuel HaNagid the MLA-Scaglione Prize for Translation. He lives in Jerusalem.

"Taut, light-footed translations . . . remarkable in the degree to which they carry over the distinct poetic complexities of the original while retaining a crisp, contemporary sense of American poetics . . . the quality of motion and emotion comes through directly."—Publisher's Weekly

"Cole's translations of Ibn Gabirol's poetry shimmer: they convey the power and mystique of the original in warm and wonderful phrases. Immediately accessible to the reader seeking beautiful locutions about love, longing, and desire. . . . Cole's introduction is a gem, delineating what little is known about Ibn Gabirol the man and describing his world, his work, and his thought in ways that will delight."—Choice

"Being medieval, these poems inevitably demonstrate the scope of religious language in their explorations of nature, drink, love, sex, boasting, friendship and loneliness. They are by turns, witty, satirical, elegiac—and always allusive."—Jane Liddell-King, Jewish Chronicle

"Peter Cole's work is an entire revelation: a body of lyric and didactic verse so intense, so intelligent, and so vivid that it appears to identify a whole dimension of historical consciousness previously unavailable to us. His work represents the finest labor of poetic translation that I have seen in many years. I am wildly enthusiastic about this fine translation of Ibn Gabirol. It is a service to readers and to literature."—Richard Howard, Poetry Editor, Paris Review, winner of the 1983 National Book Award for his translation of Baudelaire's Les Fleurs du Mal