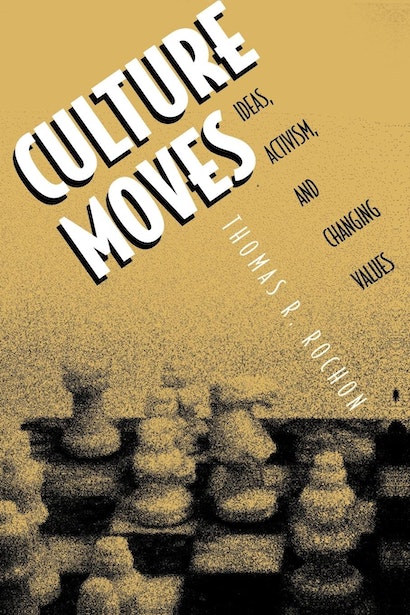 Some periods in history are marked by stability in cultural values; at other times, values undergo rapid change. How and why do cultural transformations, such as those affecting race and gender relations, take place? How does one value win acceptance in society when there are conflicting values competing for attention? In Culture Moves, Thomas Rochon addresses this complex process and develops a theory to explain both how values originate and how they spread. In particular, he analyzes the crucial role that small communities of critical thinkers play in developing new ideas and inspiring their dissemination through larger social movements.


Rochon develops this theory by drawing from such sources as survey research, content analysis of the mass media, and historical accounts. He focuses mainly on contemporary issues in the United States — such as feminism, civil rights, and environmentalism — but also discusses cases ranging from the French Revolution to the abolition of slavery. He explores the cultural niches — typically universities and research institutes — where new ideas and values evolve and then traces how these ideas play out in society through movements that may have little formal structure. Attention in the media, he argues, is often a deciding move in the contest over public opinion. This book will fundamentally revise how we understand the process of social change and what the prospects are for particular culture moves in the future.

Thomas R. Rochon is Executive Director of the Graduate Record Examination at the Educational Testing Service in Princeton, NJ. Formerly a professor at Claremont Graduate University and Princeton University, he is the author of Mobilizing for Peace: The Antinuclear Movements in Western Europe (Princeton) and The Netherlands: Negotiating Sovereignty in an Interdependent World.

"Rochon has written an important book that is a very welcome contribution to the scholarly discourse on movements and culture, particularly because it focuses on the cultural effects of movement activities. . . . This book is a 'must' for scholars in the field of cultural studies."—American Journal of Sociology

"This well-documented and well-illustrated book presents a new theoretical framework that increases understanding of the processes of cultural change and makes a significant contribution to the literature. Highly recommended."—E-Streams