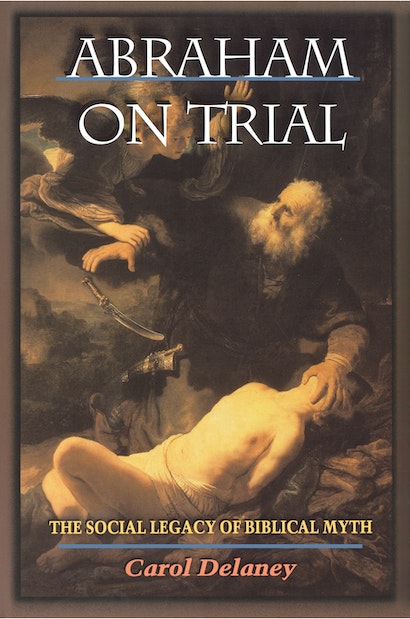 Abraham on Trial questions the foundations of faith that have made a virtue out of the willingness to sacrifice a child. Through his desire to obey God at all costs, even if it meant sacrificing his son, Abraham became the definitive model of faith for the major world religions of Judaism, Christianity, and Islam. In this bold look at the legacy of this biblical and qur’anic story, Carol Delaney explores how the sacrifice rather than the protection of children became the focus of faith, to the point where the abuse and betrayal of children has today become widespread and sometimes institutionalized. Her strikingly original analysis also offers a new perspective on what unites and divides the peoples of the sibling religions derived from Abraham and, implicitly, a way to overcome the increasing violence among them.


Delaney critically examines evidence from Jewish, Christian, and Muslim interpretations, from archaeology and Freudian theory, as well as a recent trial in which a father sacrificed his child in obedience to God’s voice, and shows how the meaning of Abraham’s story is bound up with a specific notion of fatherhood. The preeminence of the father (which is part of the meaning of the name Abraham) comes from the still operative theory of procreation in which men transmit life by means of their “seed,” an image that encapsulates the generative, creative power that symbolically allies men with God. The communities of faith argue interminably about who is the true seed of Abraham, who can claim the patrimony, but until now, no one has asked what is this seed.


Kinship and origin myths, the cultural construction of fatherhood and motherhood, suspicions of actual child sacrifices in ancient times, and a revisiting of Freud’s Oedipus complex all contribute to Delaney’s remarkably rich discussion. She shows how the story of Abraham legitimates a hierarchical structure of authority, a specific form of family, definitions of gender, and the value of obedience that have become the bedrock of society. The question she leaves us with is whether we should perpetuate this story and the lessons it teaches.

Carol Delaney is Associate Professor in Cultural and Social Anthropology at Stanford University. She has a Master's degree in Theological Studies from Harvard Divinity School and a Doctorate in Cultural Anthropology from the University of Chicago. Her other works include The Seed and the Soil: Gender and Cosmology in Turkish Village Society.

"This provocative and thoughtful analysis will resonate with all who are bothered by a father's readiness to sacrifice his son in order to demonstrate his unquestioning devotion to God."—National Jewish Post and Opinion

"Many scholars would be wary of charging a single biblical myth with aiding and abetting such a vast array of lethal power structures and ideologies as Delaney catalogues throughout the book. Yet she marshals extensive evidence and prosecutes her case with great care and competence."—Cynthia M. Baker, Bible Review

"A strikingly original and provocative analysis of a topic that is intensely controversial and yet peculiarly conventional. Carol Delaney's combination of critical methods as well as her particular focus on the implications of the Abraham story for our understanding of kinship, gender, and reproduction are unique, and bring to our attention major common ethical problems among Jews, Christians, and Muslims alike."—Gillian Feeley-Harnik, University of Michigan