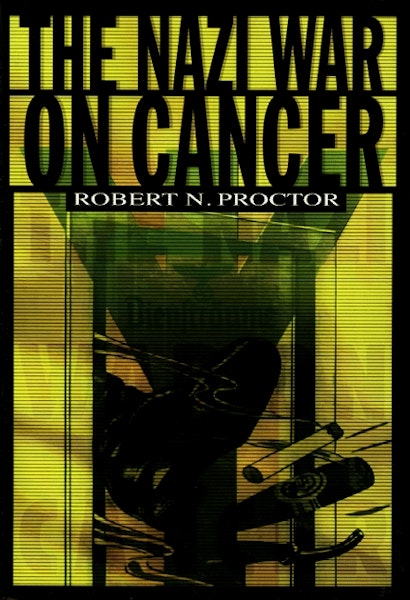 Collaboration in the Holocaust. Murderous and torturous medical experiments. The “euthanasia” of hundreds of thousands of people with mental or physical disabilities. Widespread sterilization of “the unfit.” Nazi doctors committed these and countless other atrocities as part of Hitler’s warped quest to create a German master race. Robert Proctor recently made the explosive discovery, however, that Nazi Germany was also decades ahead of other countries in promoting health reforms that we today regard as progressive and socially responsible. Most startling, Nazi scientists were the first to definitively link lung cancer and cigarette smoking. Proctor explores the controversial and troubling questions that such findings raise: Were the Nazis more complex morally than we thought? Can good science come from an evil regime? What might this reveal about health activism in our own society? Proctor argues that we must view Hitler’s Germany more subtly than we have in the past. But he also concludes that the Nazis’ forward-looking health activism ultimately came from the same twisted root as their medical crimes: the ideal of a sanitary racial utopia reserved exclusively for pure and healthy Germans.

Author of an earlier groundbreaking work on Nazi medical horrors, Proctor began this book after discovering documents showing that the Nazis conducted the most aggressive antismoking campaign in modern history. Further research revealed that Hitler’s government passed a wide range of public health measures, including restrictions on asbestos, radiation, pesticides, and food dyes. Nazi health officials introduced strict occupational health and safety standards, and promoted such foods as whole-grain bread and soybeans. These policies went hand in hand with health propaganda that, for example, idealized the Führer’s body and his nonsmoking, vegetarian lifestyle. Proctor shows that cancer also became an important social metaphor, as the Nazis portrayed Jews and other “enemies of the Volk” as tumors that must be eliminated from the German body politic.

This is a disturbing and profoundly important book. It is only by appreciating the connections between the “normal” and the “monstrous” aspects of Nazi science and policy, Proctor reveals, that we can fully understand not just the horror of fascism, but also its deep and seductive appeal even to otherwise right-thinking Germans.

Robert N. Proctor is Professor of the History of Science at Pennsylvania State University. He is the author of Cancer Wars: How Politics Shapes What We Know and Don't Know about Cancer; Racial Hygiene: Medicine under the Nazis; and Value-Free Science? Purity and Power in Modern Knowledge.

"The Nazi war on cancer? Other readers may be as incredulous as I was when this book came to my attention. We think of Hitler's regime as waging war on nations and peoples, not on behalf of public health. But good historical work surprises us by recovering forgotten facets of the past. Robert N. Proctor, a veteran historian of science who teaches at Pennsylvania State University, has produced a book full of surprises."—Michael Sherry, New York Times Book Review

"The Nazi War on Cancer is a provocative and powerful book. It presents a great deal of research in an accessible, even breezy style and makes important contributions both to the history of medicine and to our understanding of fascism's many dimensions."—Paul Lerner, The Times Higher Education Supplement

"[A] fascinating book . . . . Proctor's account is outstanding . . . A generation ago, Hannah Arendt increased the world's understanding of Nazi behavior (and caused a lot of controversy) by talking about the 'banality of evil.' Robert N. Proctor has now brought us a concept nearly as unsettling, the 'banality of good.'"—David Brown, Washington Post Book World

"Well documented and highly readable. . . . This is an important book which will encourage the reader to reflect on the ways in which medical science was conducted and used in the twentieth century."—Nature

"In his forthcoming book, Robert B. Proctor suggests that Nazi researchers were the first to recognize the connection between cancer and cigarettes. The prevailing view was that British and American scientists established the lung-cancer link during the early 1950's. In fact says Proctor, 'the Nazis conducted world-class studies in the field.' But their findings, because of the abhorrent medical practices used by the regime, were ignored. Hitler, a teetotaling vegetarian, believed healthy living advanced the master race; Jews, Gypsies and smokers soiled the purity of the nation."—David Spitz, Time Magazine

"[An] arresting and important exploration. . . . The value of [this] unblinking book lies in its revelations about why the Nazis were absorbed with the problem of cancer, what they learned about the sources of the disease, and the actions they took to prevent it."—Daniel J. Kevles, The New York Review of Books

"A fascinating look at German contributions to the study of cancer. . . . Proctor's account is well-researched and richly illustrated, and he delineates carefully documented facts in fluid prose. . . . [A]n important, instructive book."—Kirkus Reviews

"[An] illuminating analysis of the interaction between science and national neurosis. . . . Proctor provides ample documentation of his claim. . . . Proctor has produced a much-needed corrective to our understanding of the Third Reich+s medical culture."—Sherwin B. Nuland, The New Republic

"Proctor describes the Nazi-era programs and scientific work with tobacco, alcohol, and industrial chemicals in detail, enlivening his account with anecdotes and a smooth sense of humor. . . . Fascinating stuff."—Booklist

"[Proctor] succeeds admirably, giving readers a thoroughly researched account of Nazi medical science and posing difficult questions about the ultimate worth of good research carried out under the auspices of evil."—Publishers Weekly

"A readable and well-referenced book that appears to be a work of public health history but is really much more."—Journal of the American Medical Association

"A fascinating, substantial study of cancer and lifestyle in Nazi Germany.. . . Proctor's examples are vivid and his analysis incisive; precisely because of the congenial mix of the specific and the abstract, The Nazi War on Cancer stands out as a major contribution to the study of fascism and will undoubtedly—and deservedly—become a standard item, on reading lists in 20th-century history."—Peter Fritzsche, American Scientist

"A readable and well-referenced book. . . . Much of what the book reveals may well prove disturbing to many readers. . . . All who consider themselves participants in the contemporary war on cancer had best read this book."—Journal of the the American Medical Association

"A remarkable study. . . . Without in any way minimizing or relativizing the evils of medical euthanasia or genocide, Proctor shows that the Nazi obsession with nurturing a healthy Aryan people led to serious scientific work in public health that can only be called progressive in its implications."—Martin Jay, London Review of Books

"Proctor has produced an absorbing and rewarding study of a grim yet important episode in scientific history. His intellectual grip on the subject never slackens, and his well-crafted prose, almost entirely free of academic jargon, will delight a wide readership."—Ralph Amelan, The Jerusalem Post

"In this pathbreaking and courageous study, Robert N. Proctor not only tells a fascinating story but also makes an important historiographical critique. . . . Proctor challenges readers to contemplate what it means for fanaticism, crime, and callousness to have coexisted with common sense and rigorous scientific inquiry."—Bronwyn McFarland-Icke, Medical History

"Robert Proctor is an outstanding historian of science and an outstanding historian of the Third Reich. By establishing Nazism's pioneering contributions in the areas of preventive medicine, environmentalism, and public health, he takes us right to the heart of the most difficult questions in the analysis of fascism. His treatment of smoking and cancer will be a revelation. This book troubles the politics and ethics of historical interpretation in the very best ways."—Geoff Eley, author of Reshaping the German Right: Radical Nationalism and Political Change after Bismarck

"Racily and wittily written, Proctor's interesting book is a brilliant demonstration of how marginal the Nazi past has become to contemporary health issues. A conclusion long since obvious to the former inhabitants of Bosnia or Rwanda, shot or hacked to death, in the very long shadow of the Holocaust."—Michael Burleigh, author of Ethics and Extermination: Reflections on Nazi Genocide

"A profound and provocative analysis of the very essence of medical research and health policy. While Robert Proctor focuses on cancer research in Nazi Germany, his book is a detailed examination of the basic value system underlying medical research and public health policy. This unsettling and fascinating account is a 'must read' for every medical scientist."—William E. Seidelman, M.D., University of Toronto

"This book is a major contribution to the history of science and medicine in the Nazi era. Nazism emerges as a kind of vast hygienic experiment that tried to create an exclusionist utopia, by using both 'good science' and laudable health drives, along with murderous practices aimed at the Jews and others deemed to be 'unworthy of life.' The book should be of interest to anyone concerned about the ethical, political, and social implications of modern science."—Robert Gellately, author of The Gestapo and German Society: Enforcing Racial Policy

"Robert Proctor has once again produced a brilliant volume that will both fascinate and infuriate readers.... Just as he did in his previous book Racial Hygiene Proctor's analysis tears at the very fabric of our belief that good science is moral science. ...This book will force all of us to sit up and think about the consequences of our actions and our moral responsibilities to account for just what we are doing in the name of scientific neutrality and objectivity."—David Rosner, author of Deadly Dust: Silicosis and the Politics of Occupational Disease in Twentieth Century America

"Professor Proctor has written a compelling and wonderfully readable account of how Nazi physicians confronted cancer. Sophisticated research went with racial megalomania, as German researchers targeted diet, occupation, smoking, and radium as cancer-inducing. Understanding the Nazi politics of medical research and disease eradication is both haunting and instructive for modern efforts to overcome cancer."—Paul Weindling, author of Health, Race and German Politics between National Unification and Nazism, 1870-1945

"Proctor's book should fundamentally alter the way we view science under the swastika. Without minimizing either the crimes of the Nazi regime or the complexity of its internal politics, Proctor shows that National Socialist health initiatives ran the entire spectrum from barbaric to benign. This should be essential reading, not just for historians of science and medicine, but for anyone interested in the history of the Third Reich."—Diane Paul, author of Controlling Human Heredity: 1865 to the Present and The Politics of Heredity: Essays on Eugenics, Biomedicine, and the Nature-Nurture Debate

"A fascinating account of medical and public-health ideas and policies in Nazi Germany. Its ironic emphasis on the—in retrospect—'rational' aspects of Hitler-era attitudes toward environmental contaminants, tobacco, and diet underlines the complex and contingent relationships among medicine, ideology, science, and policy."—Charles Rosenberg, author of Explaining Epidemics

"Lively prose and clear organization make this a wonderful book. The Nazi War on Cancer makes a major contribution to the field of Nazi history, with its attention to 'progressive' concerns within repressive and racialized settings. Rather than 'normalizing' evil, Proctor refines it in his sustained discussions of the ethical paradoxes he has encountered in his research."—Claudia Koonz, Duke University

"This book is interesting, informative, original, well-researched and well-written, and critical yet balanced in its judgments. It breaks new ground, and should attract considerable interest among and beyond historians of science, medicine, and National Socialism."—Mark Walker, Union College

"This book is interesting, informative, original, well-researched and well-written, and critical yet balanced in its judgments. It should attract considerable interest among and beyond historians of science, medicine, and National Socialism."—Mark Walker, author of German National Socialism and the Quest for Nuclear Power, 1939-1949 and Nazi Science