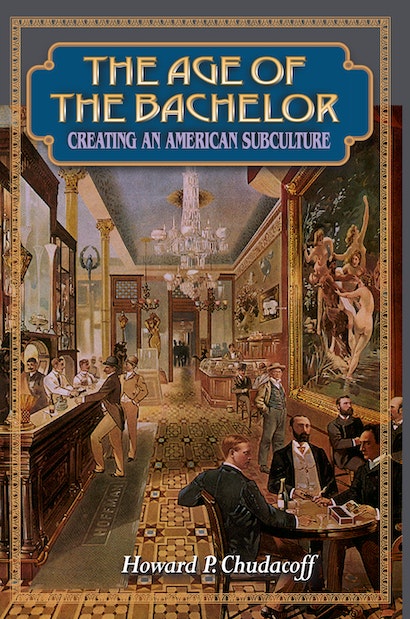 In this engaging new book, Howard Chudacoff describes a special and fascinating world: the urban bachelor life that took shape in the late nineteenth century, when a significant population of single men migrated to American cities. Rejecting the restraints and dependence of the nineteenth-century family, bachelors found sustenance and camaraderie in the boarding houses, saloons, pool halls, cafes, clubs, and other institutions that arose in response to their increasing numbers. Richly illustrated, anecdotal, and including a unique analysis of The National Police Gazette (the most outrageous and popular men’s publication of the late nineteenth and the early twentieth century), this book is the first to describe a complex subculture that continues to affect the larger meanings of manhood and manliness in American society.


The figure of the bachelor — with its emphasis on pleasure, self-indulgence, and public entertainment — was easily converted by the burgeoning consumer culture at the turn of the century into an ambiguously appealing image of masculinity. Finding an easy reception in an atmosphere of insecurity about manhood, that image has outdistanced the circumstances in which it began to flourish and far outlasted the bachelor culture that produced it. Thus, the idea of the bachelor has retained its somewhat negative but alluring connotations throughout the rest of the twentieth century. Chudacoff’s concluding chapter discusses the contemporary “singles scene” now developing as the number of single people in urban centers is again increasing.


By seeing bachelorhood as a stage in life for many and a permanent status for some, Chudacoff recalls a lifestyle that had a profound impact on society, evoking fear, disdain, repugnance, and at the same time a sense of romance, excitement, and freedom. The book contributes to gender history, family history, urban history, and the study of consumer culture and will appeal to anyone curious about American history and anxious to acquire a new view of a sometimes forgotten but still influential aspect of our national past.

Howard P. Chudacoff is University Professor and Professor of History at Brown University. One of his previous books,How Old Are You? Age Consciousness in American Culture was published by Princeton University Press in 1989.

"For many men, the bachelor lifestyle became the defining act of being a man: living unencumbered by family and free to indulge in the many pleasures city life offered. Rigorously documented but very accessible to readers of American culture."—Booklist

"This vivid study examines the salacious, sensuous bachelor lifestyle at the height of its prominence. . . . Chudacoff's research and methodology are admirable, offering a fine mix of evidence, anecdote, biographical account, and sociological material to explore all important aspects of his subject. A well-rounded view of the turn-of-the-century bachelor, particularly valuable to readers drawn to the cultural landscape of Victorian America."—Kirkus Reviews

"Sharp, insightful, and always entertaining, The Age of the Bachelor is an example of cultural history at its best."—Michael Bronski, The Boston Phoenix Literary Supplement

"What a wonderful book! Who would have expected that a history of bachelor subculture would illuminate so much of the nation's past? . . . A major contribution to a hitherto largely unexamined subject."—Benjamin G. Rader, author of American Sports: From the Age of Folk Games to the Age of Television

"Being single is typically understood as a stage of life, not a way of life. Yet in this remarkable study of bachelorhood at the turn of the last century, Howard Chudacoff explodes our myths about those errant sons and strange uncles, and reveals a subculture of masculine resistance—and thus gives bachelorhood its first history."—Michael Kimmel, author of Manhood in America: A Cultural History

"A century ago they were misfits, pariahs, deviants, vagrants, even criminal suspects. Today, bachelors evoke images of hedonistic baby-boomers and Hugh Hefner want-to-bes. Howard Chudacoff strips those images of their simplicity, convincingly showing bachelorhood to be not only misunderstood but a hidden and common social custom in American history. Full of insight and broad vision."—Timothy J. Gilfoyle, author of City of Eros: New York City, Prostitution, and the Commercialization of Sex, 1790-1920

"The Age of the Bachelor is an extremely well researched study of an important subject that had not been previously examined in any book. Chudacoff has excellent command of the secondary literature. He masterfully generated quantitative data about bachelors in three major cities, Boston, Chicago, and San Francisco, to provide us with a far more accurate accounting of bachelors than we ever had before. While the book concentrates on the period from about 1800 to 1930, Chudacoff does analyze the nature of bachelorhood throughout all of American history. He explains why bachelorhood was so surprisingly widespread, examines bachelors' domestic lives, the institutions and associations they participated in, and how the male bachelor subculture influenced male culture in general. This book is an important contribution to social and gender history, and it should be widely read. The book is analytically sound, well-written, with many interesting anecdotes, and should be of interest to scholars and general readers alike."—Steven A. Riess, Northeastern Illlinois University, author of Sport in Industrial America, 1850-1920

"This book deals with a distinctive and important topic of broad interest, and it does so convincingly, engagingly, and clearly. A truly superior work of scholarship, it is also a pleasure to read."—E. Anthony Rotundo, Phillips Academy, author of American Manhood: Transformations in Masculinity from the Revolution to the Modern Era

"The Age of the Bachelor adds an important element to the rich literature of gender, culture, and urban history in the late-nineteenth and early-twentieth centuries.... The research is exhaustive. The book is very well written and is blissfully free of jargon, making it accessible to readers both inside and outside the field."—Elaine Tyler May, University of Minnesota, author of Barren in the Promised Land: Childless Americans and the Pursuit of Happiness