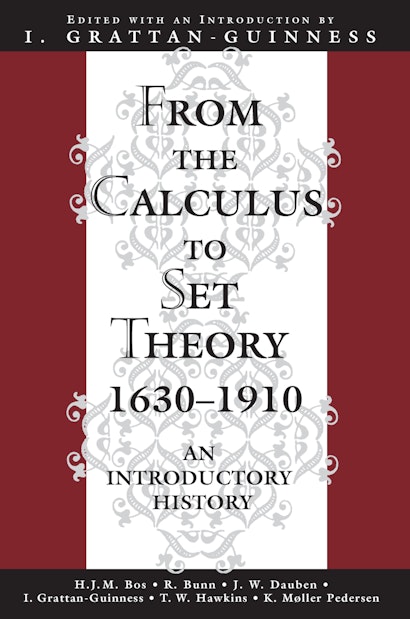 From the Calculus to Set Theory traces the development of the calculus from the early seventeenth century through its expansion into mathematical analysis to the developments in set theory and the foundations of mathematics in the early twentieth century. It chronicles the work of mathematicians from Descartes and Newton to Russell and Hilbert and many, many others while emphasizing foundational questions and underlining the continuity of developments in higher mathematics. The other contributors to this volume are H. J. M. Bos, R. Bunn, J. W. Dauben, T. W. Hawkins, and K. Møller-Pedersen.

"From the Calculus to Set Theory is a valuable reference for anyone with enough preparation in mathematics to read it."—Lenore Feigenbaum, Centaurus

"This book is a useful collection of articles. . . . The history of the calculus provides a superb lesson in how mathematics develops."—Morris Kline, Isis

"I give a lot of lectures about the history of the calculus to the mathematical community and when I am asked about what they can read to learn more history, this is always one of the books that I mention. It really is a superb introduction to the field."—V. Frederick Rickey, United States Military Academy