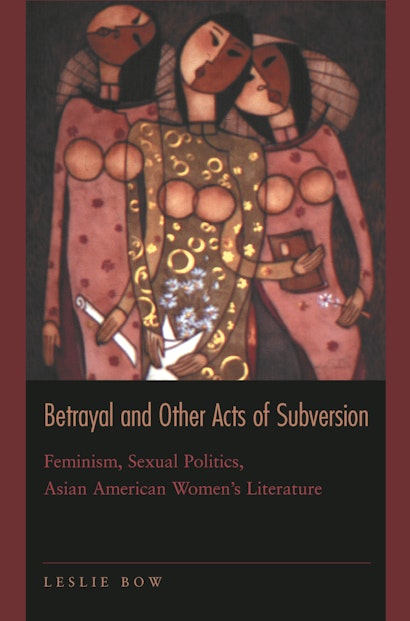 Asian American women have long dealt with charges of betrayal within and beyond their communities. Images of their “disloyalty” pervade American culture, from the daughter who is branded a traitor to family for adopting American ways, to the war bride who immigrates in defiance of her countrymen, to a figure such as Yoko Ono, accused of breaking up the Beatles with her “seduction” of John Lennon. Leslie Bow here explores how representations of females transgressing the social order play out in literature by Asian American women. Questions of ethnic belonging, sexuality, identification, and political allegiance are among the issues raised by such writers as Jeanne Wakatsuki Houston, Bharati Mukherjee, Jade Snow Wong, Amy Tan, Sky Lee, Le Ly Hayslip, Wendy Law-Yone, Fiona Cheong, and Nellie Wong. Beginning with the notion that feminist and Asian American identity are mutually exclusive, Bow analyzes how women serve as boundary markers between ethnic or national collectives in order to reveal the male-based nature of social cohesion.


In exploring the relationship between femininity and citizenship, liberal feminism and American racial discourse, and women’s domestic abuse and human rights, the author suggests that Asian American women not only mediate sexuality’s construction as a determiner of loyalty but also manipulate that construction as a tool of political persuasion in their writing. The language of betrayal, she argues, offers a potent rhetorical means of signaling how belonging is policed by individuals and by the state. Bow’s bold analysis exposes the stakes behind maintaining ethnic, feminist, and national alliances, particularly for women who claim multiple loyalties.

Leslie Bow is Assistant Professor of English at the University of Miami, where she specializes in Asian American literature, ethnic autobiography, writing by women of color, feminist theory, and theories of race, ethnicity, and pedagogy. She has published widely in journals and in edited volumes.

"Leslie Bow's book is a smart, timely, and provocative analysis of the relations between rhetorical positions and material realities, themes of identity and difference, and national politics as they are treated in Asian American women's literature. Refreshingly, this work does not romanticize agency (personal and political) but rather explores how women writers and critics negotiate agency among contradictory identity positions and discourses. This is a unique book that will have a broad-base appeal to academics, intellectuals, and activists."—Wendy S. Hesford, Indiana University

"Betrayal and Other Acts of Subversion is a challenging, informed, and thoughtful project that should be of great interest to scholars and teachers of literature, Asian American studies, and feminist studies. It fuses a set of compelling theoretical questions about national and gendered identities and affiliations with excellent examples, careful readings of narrative, and crucial background on literary publication and dissemination."—Josephine Lee, University of Minnesota