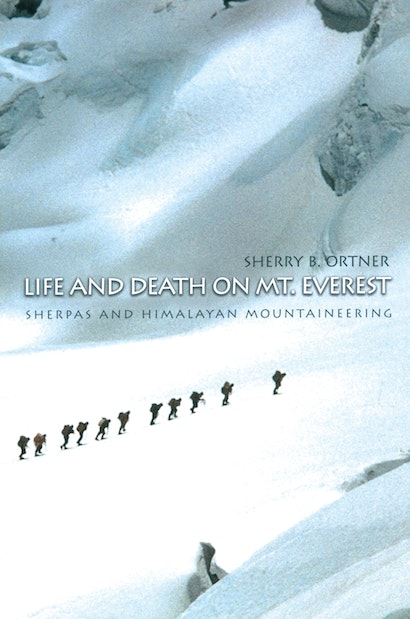 The Sherpas were dead, two more victims of an attempt to scale Mt. Everest. Members of a French climbing expedition, sensitive perhaps about leaving the bodies where they could not be recovered, rolled them off a steep mountain face. One body, however, crashed to a stop near Sherpas on a separate expedition far below. They stared at the frozen corpse, stunned. They said nothing, but an American climber observing the scene interpreted their thoughts: Nobody would throw the body of a white climber off Mt. Everest.


For more than a century, climbers from around the world have journ-eyed to test themselves on Everest’s treacherous slopes, enlisting the expert aid of the Sherpas who live in the area. Drawing on years of field research in the Himalayas, renowned anthropologist Sherry Ortner presents a compelling account of the evolving relationship between the mountaineers and the Sherpas, a relationship of mutual dependence and cultural conflict played out in an environment of mortal risk.


Ortner explores this relationship partly through gripping accounts of expeditions — often in the climbers’ own words — ranging from nineteenth-century forays by the British through the historic ascent of Hillary and Tenzing to the disasters described in Jon Krakauer’s Into Thin Air. She reveals the climbers, or “sahibs,” to use the Sherpas’ phrase, as countercultural romantics, seeking to transcend the vulgarity and materialism of modernity through the rigor and beauty of mountaineering. She shows how climbers’ behavior toward the Sherpas has ranged from kindness to cruelty, from cultural sensitivity to derision. Ortner traces the political and economic factors that led the Sherpas to join expeditions and examines the impact of climbing on their traditional culture, religion, and identity. She examines Sherpas’ attitude toward death, the implications of the shared masculinity of Sherpas and sahibs, and the relationship between Sherpas and the increasing number of women climbers. Ortner also tackles debates about whether the Sherpas have been “spoiled” by mountaineering and whether climbing itself has been spoiled by commercialism.

Sherry B. Ortner is Professor of Anthropology at Columbia University. She is the author of two previous books on the Sherpas of Nepal, Sherpas through Their Rituals and High Religion: A Cultural and Political History of Sherpa Buddhism (Princeton), and has also written books on social, cultural, and feminist theory. She has received numerous prestigious awards, including the John D. and Catherine T. MacArthur Foundation Fellowship.

"[Ortner's book] written so clearly and with such evident fascination with the subject that it's more than just accessible to lay readers: it's captivating. I've had anthropology texts put me to sleep right after morning coffee, but this one kept me awake at night."—Michael Parfit, New York Times Book Review

"Having lived and worked with the Sherpas for more than thirty years as a serious anthropologist, Ortner is in an ideal position to introduce the other, unknown culture involved with Himalayan climbing. . . . Fascinating."—Pico Iyer, New York Review of Books

"The book brings us a much richer understanding of the cultural partnership underpinning Himalayan mountaineering. . . . Life and Death on Mt. Everest is a swift and canny guide to this uncharted territory."—Alison Demos, Lingua Franca

"Sherry Ortner reveals the details of Sherpa life on and off the mountain and sweeps away a century of misguided characterizations. . . . [This] book is one of those rare crossover works, a scholarly exploration of Sherpa culture that the lay reader (climber or not) will find utterly fascinating."—Newsday

"[A] first-rate study. . . . [Ortner] is an intelligent and fair-minded scholar who has combed the mountain literature and fused it with what she observed in the field."—David Craig, Los Angeles Times

"A remarkable display of agile fieldwork, sensitive to all the distinctive shadings that compose [the] subject. . . . Ortner arrives at a complex but cohesive portrait of the century-long Sherpa association with the mountaineers."—Kirkus Reviews

"This is not another nail-biting saga of alpine disaster, but rather—finally—an authoritative study of the group that has made summiting 8,000-meter Himalayan peaks possible for Westerners. . . . Ortner retells the Everest story from the Sherpa point of view."—Outside

"A fascinating examination of the world of the Sherpas. . . . [Ortner's] book is an eye-opening, behind-the-scenes look at mountaineering."—Library Journal

"A well-written and thorough account. . .and the only book on this topic."—Choice

"A fascinating new study of the interaction between Western climbers and Sherpas."—Susan Spano, Los Angeles Times

"Sherry Ortner's Life and Death on Mt. Everest is a stunning book: it is a probing ethnography of the strange, unequal relationship between 'sahibs' and Sherpas, a suggestive social history of the contemporary leisure class, and a powerful, often painful meditation on the cult and culture of high-risk mountaineering. With a humane, ironic, steady, and compassionate gaze, Ortner looks at lives lived at the edge of an abyss."—Stephen Greenblatt

"Sherry Ortner's Life and Death on Mt. Everest is an extraordinary study of the Sherpa people, opening windows into the realities of their lives and minds, a revelatory look at the whole mountaineering thing from their perspective, and an amazingly rich account of the fascinating world of the Himalayas and the Tibetan peoples. This book is a must read for any student of Tibet and the history of the interactions of Westerners and Tibetan peoples."—Robert Thurman

"Ortner has always been one of the clearest and most forceful writers among contemporary anthropologists and her wit and lucidity are once again in evidence here."—Arjun Appadurai, University of Chicago

"This highly readable book demonstrates the best of what contemporary anthropology can offer scholars and the reading public alike. A fascinating account of a timely subject."—Naomi Bishop