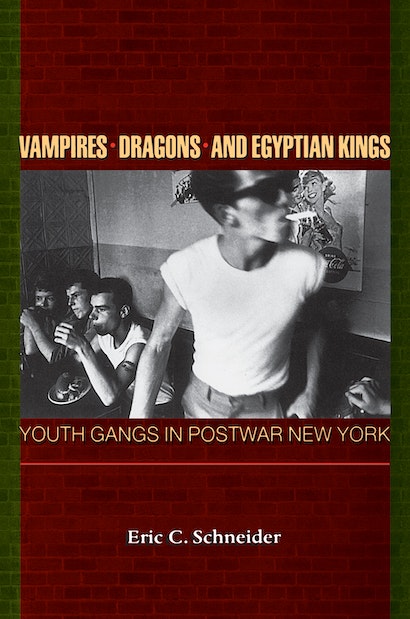 They called themselves “Vampires,” “Dragons,” and “Egyptian Kings.” They were divided by race, ethnicity, and neighborhood boundaries, but united by common styles, slang, and codes of honor. They fought — and sometimes killed — to protect and expand their territories. In postwar New York, youth gangs were a colorful and controversial part of the urban landscape, made famous by West Side Story and infamous by the media. This is the first historical study to explore fully the culture of these gangs. Eric Schneider takes us into a world of switchblades and slums, zoot suits and bebop music to explain why youth gangs emerged, how they evolved, and why young men found membership and the violence it involved so attractive.


Schneider begins by describing how postwar urban renewal, slum clearances, and ethnic migration pitted African-American, Puerto Rican, and Euro-American youths against each other in battles to dominate changing neighborhoods. But he argues that young men ultimately joined gangs less because of ethnicity than because membership and gang violence offered rare opportunities for adolescents alienated from school, work, or the family to win prestige, power, adulation from girls, and a masculine identity. In the course of the book, Schneider paints a rich and detailed portrait of everyday life in gangs, drawing on personal interviews with former members to re-create for us their language, music, clothing, and social mores. We learn what it meant to be a “down bopper” or a “jive stud,” to “fish” with a beautiful “deb” to the sounds of the Jesters, and to wear gang sweaters, wildly colored zoot suits, or the “Ivy League look.” He outlines the unwritten rules of gang behavior, the paths members followed to adulthood, and the effects of gang intervention programs, while also providing detailed analyses of such notorious gang-related crimes as the murders committed by the “Capeman,” Salvador Agron.


Schneider focuses on the years from 1940 to 1975, but takes us up to the present in his conclusion, showing how youth gangs are no longer social organizations but economic units tied to the underground economy. Written with a profound understanding of adolescent culture and the street life of New York, this is a powerful work of history and a compelling story for a general audience.

Eric C. Schneider is Assistant Dean in the College of Arts and Sciences and Adjunct Associate Professor of History at the University of Pennsylvania. He is the author of In the Web of Class: Delinquents and Reformers in Boston, 1810s-1930s.

"A comprehensive and tantalizing picture of the street gang culture that was part of the New York City mythology from the '40s to the '70s. [Schneider] knows his way around the streets and does a particularly good job of making sense of the drug plague that ended the original postwar gang culture. . . . Schneider's understanding (if not affection) for the gang style informs the work throughout. Vampires, Dragons, and Egyptian Kings is a sharp book about a peculiar moment in the New York life—one that seems strangely antiquated as we approach the new millennium."—Martin Jackson, Village Voice

"[Schneider's] study of Manhattan youth gangs in the years after World War II blends academic disciplines with the author's recollections of the events he traces.Fascinating history."—Booklist

"Drawing on countless sources meticulously noted, [Schneider] offers reasons for the emergence of gangs, shows us their particular culture, assesses intervention programs, and traces their decline in the 1960s and resurgence in the 1970s. Throughout, he augments his scholarly research with excerpts from interviews with former gang members."—Library Journal

"A very strong analysis of gangs in postwar New York City. Schneider's historical approach to understanding gang activities is innovative.... This is a well-written and interesting book that should appeal to a wide audience."—Ruth Horowitz, New York University

"In this marvelous and fascinating book, Eric Schneider tells the real West Side Story. With a wide array of sources-including interviews with former gang members-he locates the post-war history of New York City's gangs in the multiple transformations of the city's social ecology, economy, ethnic and race relations, institutions, and culture."—Michael B. Katz, University of Pennsylvania

"Drawing on an extraordinary range of primary and secondary materials, Eric Schneider has produced an incisive and compelling history of youth gangs in New York City."—Ellen Dwyer, Indiana University

"An original and imaginative work both of historical significance and narrative power. It is thoroughly grounded in the scholarly literature. . . . At the same time, it is so well written and contains so many remarkable stories that it will be accessible to general readers as well."—Margaret Marsh, Rutgers University

"This is the kind of book we need to regain our sanity about young people and violence."—Carl Nightingale, University of Massachusetts, Amherst

"Schneider succeeds in offering an insightful analysis of youth gangs, linking the methods of social history with those of sociology, anthropology, and criminology. This book is well worth the attention of a wide readership."—David Wolcott