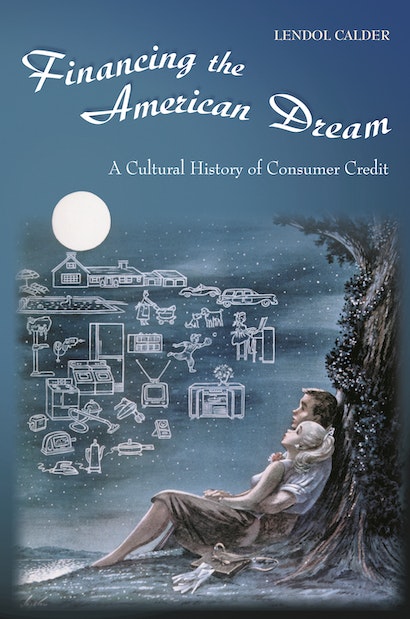 Once there was a golden age of American thrift, when citizens lived sensibly within their means and worked hard to stay out of debt. The growing availability of credit in this century, however, has brought those days to an end — undermining traditional moral virtues such as prudence, diligence, and the delay of gratification while encouraging reckless consumerism. Or so we commonly believe. In this engaging and thought-provoking book, Lendol Calder shows that this conception of the past is in fact a myth.


Calder presents the first book-length social and cultural history of the rise of consumer credit in America. He focuses on the years between 1890 and 1940, when the legal, institutional, and moral bases of today’s consumer credit were established, and in an epilogue takes the story up to the present. He draws on a wide variety of sources — including personal diaries and letters, government and business records, newspapers, advertisements, movies, and the words of such figures as Benjamin Franklin, Mark Twain, and P. T. Barnum — to show that debt has always been with us. He vigorously challenges the idea that consumer credit has eroded traditional values. Instead, he argues, monthly payments have imposed strict, externally reinforced disciplines on consumers, making the culture of consumption less a playground for hedonists than an extension of what Max Weber called the “iron cage” of disciplined rationality and hard work.


Throughout, Calder keeps in clear view the human face of credit relations. He re-creates the Dickensian world of nineteenth-century pawnbrokers, takes us into the dingy backstairs offices of loan sharks, into small-town shops and New York department stores, and explains who resorted to which types of credit and why. He also traces the evolving moral status of consumer credit, showing how it changed from a widespread but morally dubious practice into an almost universal and generally accepted practice by World War II. Combining clear, rigorous arguments with a colorful, narrative style, Financing the American Dream will attract a wide range of academic and general readers and change how we understand one of the most important and overlooked aspects of American social and economic life.

"Americans feel ashamed about so-called consumption debt, writes Mr. Calder in prose that's as clear as a bell, because they're psychologically frozen in a 100-year-old mindset. . . . Mr. Calder's argument is so deliciously seditious that you have to wonder: What's wrong with this picture? . . . Mr. Calder's sections on pawnbrokers, door-to-door peddlers and small lenders are worth the price of admission alone."—Cynthia Crossen, The Wall Street Journal

"Contrary to those who piously and ahistorically rail against consumer debt as a modern fall from grace, Calder takes a much more nuanced and interesting view. [He] is to be commended for showing us the other side."—Reason

"In a surprisingly lively book about a potentially dreary subject, Calder argues that debt is as American as apple pie and that consumer borrowing has been an important engine of economic growth."—Charles Stein, The Boston Globe

"A broadly researched book on the history of US consumer credit that breaks new ground and revises prevailing views. . . . This finely written volume is a major contribution."—Choice

"Those who complain that the debt represents an abandonment of thrift and a growing lack of willingness to defer gratification are wrong, claims Calder. . . . [He] makes the case that today's 'culture of consumption' arose as much from the availability of credit as from the efforts of advertisers and marketers."—Booklist

"Calder is at his best . . . drawing extensively on anecdotal and literary evidence to create a lively narrative."—Publishers Weekly (starred review)

"There was never a golden age when everybody paid cash. . . . Moreover, Calder's research convinced him that, far from creating a nation of hedonistic wastrels, consumer credit's rigorous system of monthly payments imposes a puritanical discipline of hard work and thrift."—The New Yorker

"Calder's work greatly increases our understanding of the rise of consumer culture in America."—Jonathan Silva, The Historian

"[An] informative and accessible volume. Utilizing a wide range of sources . . . Calder examines the cultural matrix of consumer credit in the United States from the Gilded Age to the New Deal."—Stephanie Dyer, Enterprise & Society

"In the best tradition of cultural history, Lendol Calder explores the fusion of materialistic and idealistic impulses within the much-heralded American Dream. . . . Financing the American Dream is an institutional history of the consumer credit industry, a social history of consumers, and a cultural history of debt. It not only suggests how Americans learned to pay for goods in creative ways but explains the process by which consumer credit came to receive widespread moral sanction. . . . Calder has given us an important contribution to American social and cultural history that places consumerism in the rich context it deserves."—David A. Horowitz, Journal of Social History

"At last—an accessible and scholarly history of the American consumer's best friend and worst enemy."—James Grant, author of Money of the Mind and editor of Grant's Interest Rate Observer

"Lendol Calder is the first scholar in the field of modern U.S. social history to describe and analyze the century-long (1820s through 1920s) evolution of the incidence of debt, the availability of credit, and the prevailing attitudes toward both, as keystones to understanding twentieth-century changes in U.S. consumer cultureÖ. The quality of writing in the book is exceptional."—Otis A. Pease, University of Washington

"Calder has produced a book that will not only add to what we know about 'consumer culture,' but will also force business historians to rethink the relative importance to the rise of consumerism of management innovations and advertising. Calder shows clearly that there is a third source of consumerism: installment credit."—William R. Childs, Ohio State University