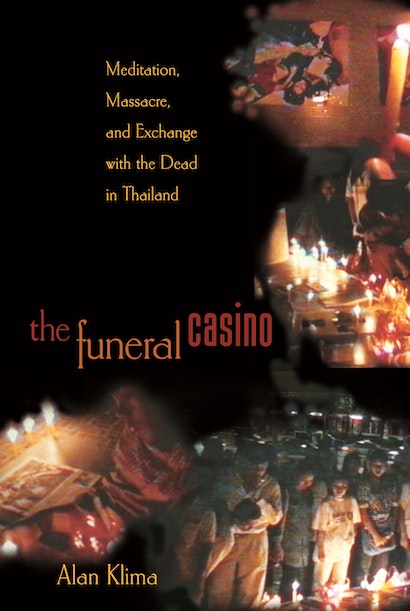 The Funeral Casino is a heretical ethnography of the global age. Setting his book within Thailand’s pro-democracy movement and the street massacres that accompanied it, Alan Klima offers a strikingly original interpretation of mass-mediated violence through a study of funeral gambling and Buddhist meditation on death.


The fieldwork for the book began in 1992, when a freewheeling market of illegal “massacre-imagery” videos blossomed in Bangkok on the very site where, days earlier, for the third time in two decades, a military-controlled government had killed scores of unarmed pro-democracy protesters. Such killings and their subsequent representation have lent force to Thailand’s transition from military control to a “media-financial complex.” Probing the ways in which death is marketed, visualized, and remembered through practices both local and global, Klima inverts conventional relationships between ethnography and theory through a compelling narrative that reveals a surprising new direction available to anthropology and critical theory.


Ethnography here engages with the philosophy of activism and the politics of memory, media representation of violence, and globalization. In focusing on the particular array of tactics in Thai Buddhism and protest politics for connecting death and life, past and present, this book unveils a vivid and haunting picture of community, responsibility, and accountability in the new world order.

Alan Klima is Assistant Professor of Anthropology at the University of California, Davis.

"Klima's attempt to bring philosophy into ethnography is important. . . . This book is an important contribution to the ongoing critique and dialogue in anthropology about visuality, representation and symbolic exchange."—Christophe Robert, Anthropological Quarterly

"In bringing together an ancient Buddhist practice of meditation of the corpse with globalised technologies of massacre in Thailand, Alan Klima has written an amazing book that makes you rethink your body and the body politic. There are few interventions into Western theory that have been as productive as this breathtaking endeavor. Bataille and Benjamin will never seem the same. A stirring endorsement of anthropology as a radical discipline, this book also appeals on account of its uniquely down to earth populist style that at manic speed propels you into the crowds on the streets, the charnel house and temples, and intimate portraits of real people no less than of the sleaze of the World Bank and elites that have, as yet, to experience what Klima has experienced in meditating over the corpse."—Michael Taussig

"Alan Klima's hallucinatory account of death in the streets of Bangkok and his indictment of the efforts to convert death into mere exchange value has enormous potential for the field of Thai studies, where it is likely to erupt onto the scene like a small bomb. It offers a relentless repudiation of those saccharine tropes through which Thailand has mainly been read."—Rosalind Morris