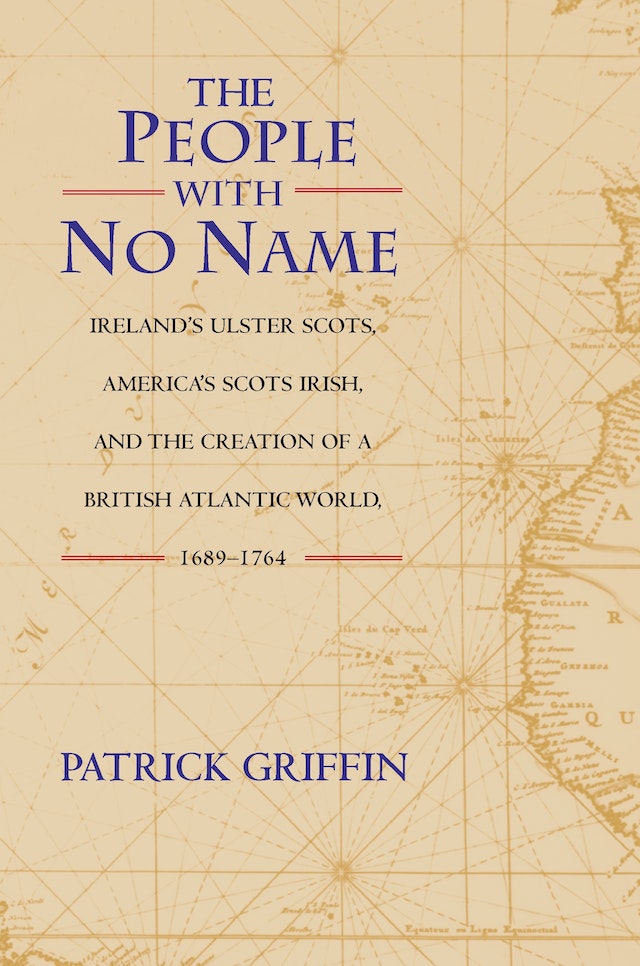 More than 100,000 Ulster Presbyterians of Scottish origin migrated to the American colonies in the six decades prior to the American Revolution, the largest movement of any group from the British Isles to British North America in the eighteenth century. Drawing on a vast store of archival materials, The People with No Name is the first book to tell this fascinating story in its full, transatlantic context. It explores how these people — whom one visitor to their Pennsylvania enclaves referred to as ”a spurious race of mortals known by the appellation Scotch-Irish” — drew upon both Old and New World experiences to adapt to staggering religious, economic, and cultural change. In remarkably crisp, lucid prose, Patrick Griffin uncovers the ways in which migrants from Ulster — and thousands like them — forged new identities and how they conceived the wider transatlantic community.


The book moves from a vivid depiction of Ulster and its Presbyterian community in and after the Glorious Revolution to a brilliant account of religion and identity in early modern Ireland. Griffin then deftly weaves together religion and economics in the origins of the transatlantic migration, and examines how this traumatic and enlivening experience shaped patterns of settlement and adaptation in colonial America. In the American side of his story, he breaks new critical ground for our understanding of colonial identity formation and of the place of the frontier in a larger empire. The People with No Name will be indispensable reading for anyone interested in transatlantic history, American Colonial history, and the history of Irish and British migration.

Patrick Griffin is an Assistant Professor in the History Department of Ohio University.

"This highly recommended monograph is based on broad and deep archival research on both sides of the ocean and is written in a clear, lively style that quotes abundantly from contemporary sources."—Stanley H. Palmer, History

"A good analysis of one of the several disaffected and displaced groups that occupied the margins of the colonial world."—Choice

"In part, Griffin's book is so successful because he understands that the historian of any diaspora has a dual responsibility: to the homeland and to the new land. Privileging either of these distorts the picture. . . . Griffin's fine book will stand as a fundamental building block of Ulster Scots and of Scots-Irish historical study."—Donald Harman Akenson, American Historical Review

"A welcome contribution to a field with a small but growing literature."—H. Tyler Blethen, William and Mary Quarterly

"An excellent study of interest not only to students of Britain, Ireland, and colonial America, but also to those seeking to understand the eighteenth-century British Empire as a whole."—K. David Milobar, International History Review

"There is much new in Griffin's study. . . . His accomplishment derives in part from an ability to discuss identity formation in a jargon-free story at once engaging and profound."—Warren R. Hofstra, Journal of American History

"A masterful reconstruction of the experiences of the Scots Irish migrants who transformed the culture of the eighteenth-century colonial frontier. Drawing creatively on research materials in Ireland and America, Griffin shows how these extraordinarily resilient people made sense of an expanding commercial world and managed to accommodate to rapidly changing social conditions without compromising their own hard-earned identity."—T.H. Breen, Northwestern University

"This is a first-rate and timely piece of scholarship, offering a compelling new vision of transatlantic history and an equally compelling analysis of the intricacies of identity and culture in the colonial Atlantic world. It may well be the best sustained study of the 'Ulster Scot' in the Atlantic world that has been written in a generation."—Kevin Kenny, Boston College

"A significant contribution to the field. Certainly, every scholar who does research in Irish and/or Scots Irish history will want to read this book, as will many specialists in immigration history. Griffin's book will also be a valuable complement to the burgeoning study of transatlantic or the 'new' British history, and will attract specialists in 18th century Irish (especially Ulster) history as well."—Kerby Miller, University of Missouri at Columbia