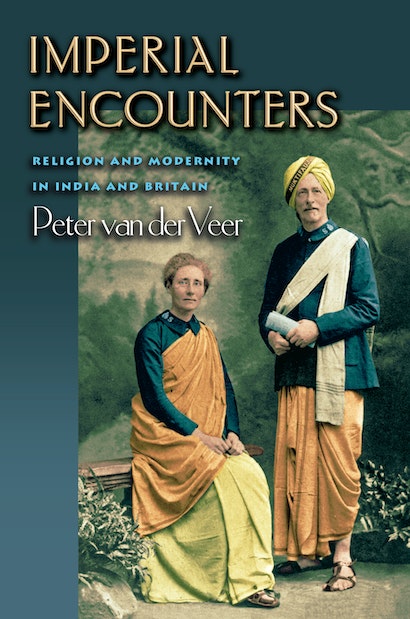 Picking up on Edward Said’s claim that the historical experience of empire is common to both the colonizer and the colonized, Peter van der Veer takes the case of religion to examine the mutual impact of Britain’s colonization of India on Indian and British culture. He shows that national culture in both India and Britain developed in relation to their shared colonial experience and that notions of religion and secularity were crucial in imagining the modern nation in both countries. In the process, van der Veer chronicles how these notions developed in the second half of the nineteenth century in relation to gender, race, language, spirituality, and science.

Avoiding the pitfalls of both world systems theory and national historiography, this book problematizes oppositions between modern and traditional, secular and religious, progressive and reactionary. It shows that what often are assumed to be opposites are, in fact, profoundly entangled. In doing so, it upsets the convenient fiction that India is the land of eternal religion, existing outside of history, while Britain is the epitome of modern secularity and an agent of history. Van der Veer also accounts for the continuing role of religion in British culture and the strong part religion has played in the development of Indian civil society. This masterly work of scholarship brings into view the effects of the very close encounter between India and Britain — an intimate encounter that defined the character of both nations.

Peter van der Veer is Professor of Comparative Religion and Director of the Research Center for Religion and Society at the University of Amsterdam. His books include Gods on Earth: The Management of Religious Experience and Identity in a North Indian Pilgrimage Centre, Religious Nationalism: Hindus and Muslims in India, and Modern Orientalism. He is the editor of Nation and Migration: The Politics of Space in the South Asian Diaspora, Conversion to Modernities: The Globalization of Christianity, and, with Hartmut Lehmann, Nation and Religion: Perspectives on Europe and Asia (Princeton).

"Peter van der Veer's bracing, audacious book is sure to stir up much-needed debate. Challenging the canonical narratives that have governed analysis of colonialism, culture, and religion, he advances a bold thesis about their complicity across boundaries and nationalist categories. Deeply learned and elegantly presented, Imperial Encounters is a gripping work of the scholarly imagination."—Edward W. Said, Columbia University

"This is a splendid book. Peter van der Veer has drawn on a wide range of fascinating readings to elaborate the post-colonial thesis that the modern histories of Britain and India have been mutually constitutive. I believe he is absolutely right in insisting on the fact—and demonstrating it so ably—that modern ideas like nation, religion, and race must be understood, if they are to be understood fully, through an interactional approach. Anyone interested in recent thinking about the joint history of colonialism and modernity should not miss this work."—Talal Asad, City University of New York

"Peter van der Veer has made extremely important contributions to the study of Indian history and society. In recent years, he has taken a particularly important approach, one the puts him at the cutting edge of historical work, in placing the European metropole and the Asian colonized into the same historical space. In this volume, he explores one aspect of the subject in depth and provides a coherent single-voice narrative. The scholarship is of the highest level, and van der Veer writes very well, often with a clever nuance or twist."—Barbara Metcalf, University of California, Davis