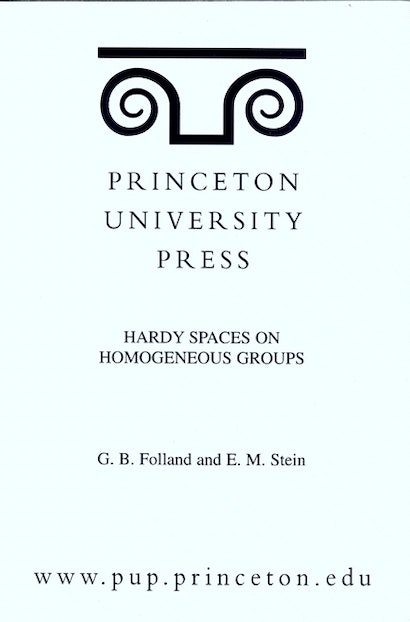 The object of this monograph is to give an exposition of the real-variable theory of Hardy spaces (HP spaces). This theory has attracted considerable attention in recent years because it led to a better understanding in Rn of such related topics as singular integrals, multiplier operators, maximal functions, and real-variable methods generally. Because of its fruitful development, a systematic exposition of some of the main parts of the theory is now desirable. In addition to this exposition, these notes contain a recasting of the theory in the more general setting where the underlying Rn is replaced by a homogeneous group.

The justification for this wider scope comes from two sources: 1) the theory of semi-simple Lie groups and symmetric spaces, where such homogeneous groups arise naturally as “boundaries,” and 2) certain classes of non-elliptic differential equations (in particular those connected with several complex variables), where the model cases occur on homogeneous groups. The example which has been most widely studied in recent years is that of the Heisenberg group.