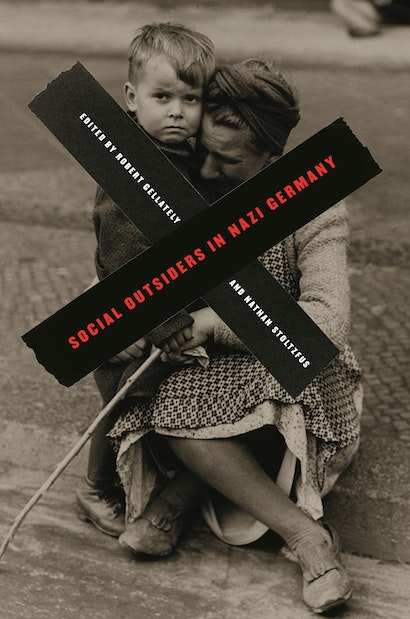 When Hitler assumed power in 1933, he and other Nazis had firm ideas on what they called a racially pure “community of the people.” They quickly took steps against those whom they wanted to isolate, deport, or destroy. In these essays informed by the latest research, leading scholars offer rich histories of the people branded as “social outsiders” in Nazi Germany: Communists, Jews, “Gypsies,” foreign workers, prostitutes, criminals, homosexuals, and the homeless, unemployed, and chronically ill. Although many works have concentrated exclusively on the relationship between Jews and the Third Reich, this collection also includes often-overlooked victims of Nazism while reintegrating the Holocaust into its wider social context.


The Nazis knew what attitudes and values they shared with many other Germans, and most of their targets were individuals and groups long regarded as outsiders, nuisances, or “problem cases.” The identification, the treatment, and even the pace of their persecution of political opponents and social outsiders illustrated that the Nazis attuned their law-and-order policies to German society, history, and traditions. Hitler’s personal convictions, Nazi ideology, and what he deemed to be the wishes and hopes of many people, came together in deciding where it would be politically most advantageous to begin.


The first essay explores the political strategies used by the Third Reich to gain support for its ideologies and programs, and each following essay concentrates on one group of outsiders. Together the contributions debate the motivations behind the purges. For example, was the persecution of Jews the direct result of intense, widespread anti-Semitism, or was it part of a more encompassing and arbitrary persecution of “unwanted populations” that intensified with the war? The collection overall offers a nuanced portrayal of German citizens, showing that many supported the Third Reich while some tried to resist, and that the war radicalized social thinking on nearly everyone’s part.

Robert Gellately holds the Strassler Family Chair for the Study of Holocaust History in the Center for Holocaust Studies at Clark University. His books include Backing Hitler: Consent and Coercion in Nazi Germany and The Gestapo and German Society: Enforcing Racial Policy, 1933-1945. Nathan Stoltzfus, Associate Professor in the Department of History at Florida State University, is the author of Resistance of the Heart: Intermarriage and the Rosenstrasse Protest in Nazi Germany.

"This volume will be essential reading for scholars and students of Nazi Germany for many years to come."—Matthew Stibbe, German History

"This is one of the first major collections in English devoted solely to the crucial question of how certain groups were officially defined and treated as 'outsiders' in German society under the Nazis. The book takes a laudably wide and imaginative view of its subject, looking beyond the more familiar categories of racial exclusion and complicating the vision of a strictly organized Nazi social order. . . . The authors bring both depth and range to their essays, and the collection as a whole not only offers a series of focussed case studies but also surveys the state of international research in the field."—Jane Caplan, Bryn Mawr College

"Gellately and Stoltzfus have put together a most useful collection of essays. It serves as a timely introduction into a dispersed field of research, and it should generate an interest in further debating the history of outsiders and the nature of social panic in the twentieth century."—Michael Geyer, University of Chicago