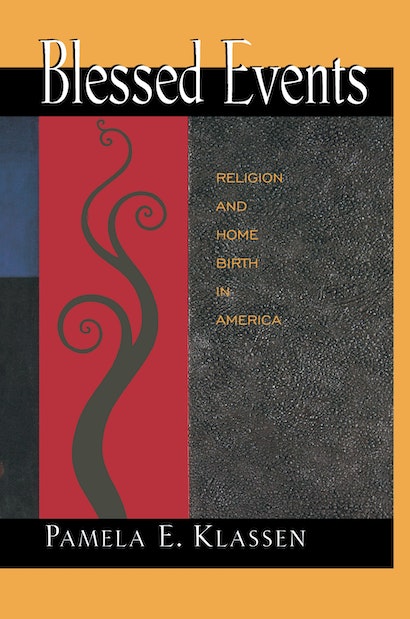 Blessed Events explores how women who give birth at home use religion to make sense of their births and in turn draw on their birthing experiences to bring meaning to their lives and families. Pamela Klassen introduces a surprisingly diverse group of women, in their own words, while also setting their birth stories within wider social, political, and economic contexts. In doing so, she emerges with a study that disrupts conventional views of both childbirth and religion by blurring assumed divisions between conservative and feminist women and by taking childbirth seriously as a religious act.

Most American women who have a choice give birth in a hospital and request pain medication. Yet enough women choose and advocate unmedicated home birth — and do so for carefully articulated reasons, social resistance among them — to constitute a movement. Klassen investigates why women whose religious affiliations range from Old Order Amish to Reform Judaism to goddess-centered spirituality defy majority opinion, the medical establishment, and sometimes the law to have their babies at home. In considering their interpretations — including their critiques of the dominant medical model of childbirth and their views on labor pain — she examines the kinds of agency afforded to or denied women as they derive religious meanings from childbirth. Throughout, she identifies tensions and affinities between feminist and traditionalist appraisals of the symbolic meaning of birth and the power of women.

What does home birth — a woman-centered movement working to return birth to women’s control — mean in practice for women’s gender and religious identities? Is this supreme valuing of procreation and motherhood constraining, or does it open up new realms of cultural and social power for women? By asking these questions while remaining cognizant of religion’s significance, Blessed Events challenges both feminist and traditionalist accounts of childbearing while broadening our understanding of how religion is ”lived” in contemporary America.

Pamela E. Klassen is Assistant Professor in the Department and Centre for the Study of Religion at the University of Toronto. She is the author of Going by the Moon and the Stars: Stories of Two Russian Mennonite Women.

"Considering home birth from a wide variety of perspectives—sociological, political, ethical, medical, psychological, and spiritual—Klassen finds that the pain of childbirth and home birth itself often has a profound impact on the women who choose it."—Library Journal

"In this provocative and engagingly written ethnography, Klassen offers an important complement to other social studies on childbirth in America."—Publishers Weekly

"Blessed Events will appeal most to those in the alternative birth movement, but will be of interest to anyone committed to exploring female embodied experience, as well as those interested in relations between religion and spirituality."—Amy Mullin, Journal of the Association for Research in Mothering

"Klassen fascinates as she shows us how women who give birth at home experience the simultaneous embodiment of pain and power, self-sufficiency and surrender, immanence and transcendence. Weaving these themes into a cohesive portrait of home birthers in all their complexity, Klassen gives us at the same time new ways of understanding what it means to practice religion in contemporary America."—Robbie Davis-Floyd, author of Birth as an American Rite of Passage

"This lively book analyzes how women who chose to give birth at home create meaning from their birthing experiences. It makes a significant contribution to several fields, including religious studies and feminist theory, and will also be useful to general readers who are interested in the manifestation of religion in everyday life, as well as to anyone considering home birth."—Lynn Davidman, Brown University

"This book examines how women who give birth at home use religious discourse to make meaning of their birth experiences and to resist the views of the dominant society, especially the medical establishment. Carefully, through a nuanced argument that explores the perspectives of women from very diverse backgrounds, Klassen challenges and enlarges what we understand as 'religion.'"—Mary Jo Neitz, University of Missouri